Herons: In the hands of Turkish engineers 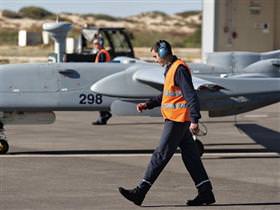 Defense Industry Undersecretary Murad Bayar has announced that they will not be holding a tender for the maintenance of the herons and they will be signing an agreement with TAİ.

Bayar's announcement stated that they are currently working on the maintenance and logistics of the Turkish Armed Forces' weapon inventory, and the news that weapons purchases and weapon system's maintenance may be transferred to the private sector has been misguidedly launched.
Explaining that in years past, TAF primarily used weapons systems purchased abroad, Murad Bayar states, 'Systems for the maintenance and repair of these weapon systems, which are primarily mechanical have been set-up within the Turkish Armed Forces, rightfully so, this method has been selected. If you are going to utilize the weapons, then you need to be able to do the maintenance and repairs in order for these weapons to be readily functioning during times of conflict."
''Those who manufacture, can also do the servicing"
Pointing out that in time, the domestic weapons industry has advanced; Bayar explains that the majority of weapons used today are manufactured in Turkey.
Bayar noted the following:

''We are not purchasing abroad, therefore we have companies in Turkey that do these things. There is no need for a separate investment for our weapons systems in the upcoming period. For example, there is no need for a separate investment to be made by the public for the maintenance of the ANKA unmanned aerial vehicles nor for the opening of a separate facility for maintenance and repair. Who built the ANKA? The Turkish Aviation and Space Industry (TAİ-TUSAŞ) did. Those who manufacture can also do the servicing, think about the vehicles that you buy. The automobile is serviced from where it is purchased.
Our national firms in Turkey now have the capabilities to do the electronic systems programming and servicing for planes, tanks and ships. Because it is the same firm that manufactures said plane, tank or ship. Therefore there will be a conceptual transformation in the upcoming period. We are working with the armed forces. As our inventory enters the national systems, the same industrial establishments will continue to take on maintenance, because they are the specialists."
''This is a project we are working on with the General Staff"
Bayar who explains that they have established a work group with the aid of an assistant undersecretary from the Defense Industry Undersecretariat, went on to state the following:
''We have not gone into logistics thus far. Once our national systems begin to surface, we will also begin to take on this duty. This will be a project we work on with the General Staff. This is work that will take a long time and is not something that can be done from morning to night. The maintenance of our current weapons systems will be conducted through the current system in place. However for example, the ATAK helicopter has been entered into the inventory. The TAI helicopter has been added to the inventory. Therefore, in this aspect TAI, the manufacturers of the helicopter, will play an important role in spare parts and modernization. This is a transitional situation and the TAF factories will not be shut down tomorrow."
Emphasizing that this transitional period could last 10 to 15 years, Bayar states that with the entrance of the new domestic weapons systems in the TAF inventory and the maintenance and repair work which will now be conducted within the domestic industry will in effect work to advance the capabilities of the domestic industry.

Will the Israeli firm be able to participate in the Heron tender?

Bayar also emphasized that they will not be holding a tender for efforts to establish manufacturing firms to take on the systems maintenance and repairs and noted that everything that he has detailed solely pertains to national weapons.
Explaining that there is no special situation in place for Israeli made Herons, Bayar went on to state the following:
"We have granted the duty to TAI under the supposition that we will not be receiving logistic services from Israel. We said, 'let's establish a national structure in Turkey for maintenance and repair. We are signing a contract with TAİ for the Heron's maintenance. We will no longer be sending the Herons to Israel for maintenance. We will be using subsidiary industry establishments. The entire maintenance of the Herons will be conducted in Turkey. When we take on mass production of the ANKA, we will no longer need the Herons anyway. We will not be holding a tender for the maintenance of Herons. We will be signing a contract with TAİ and that is it."