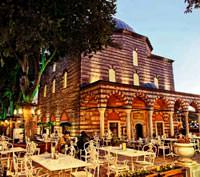 Istanbul’s historical Turkish baths, a number of which were built by the famous Ottoman architect Mimar Sinan, are undergoing renovations in order to open up for tourism. Tourists will be able to experience these luxurious Turkish baths at prices starting from 70 Euros.

The renovation and promotion of Istanbul's historical Turkish baths has added yet another marketing element to Turkey's tourism industry.

Istanbul's Turkish baths are being renewed according to consultation by historians in order to be able to bring to life the Ottoman bathing rituals for tourists. The latest Turkish bath that was renewed and opened to the public is the 450 year-old Hagia Sophia Turkish bath, was commissioned by Suleyman the Magnificent to be built by Mimar Sinan for Hürrem Sultan and is located directly across from the Hagia Sophia Mosque. After wandering the historical sites in Sultanahmet, tourists can take a break by way of bathing like the sultans for anywhere between 75 dollars and 165 dollars.

Renovations of the Kılıç Ali Paşa Turkish bath, located in Tophane and bought by businessman Ergin İnan in 2010, will be completed by the end of the year. Visitors will have to make a reservation to be able to bath in this Turkish bath. The Ortaköy Turkish bath, which is located in the district of the same name and claimed to be the final work of Mimar Sinan has undergone renovations by the owner of Delta Mimarlık Adem Yılmaz.
With 1.5 million dollars worth of renovations, Yılmaz has transformed the Turkish bath into a design center. After two years of renovations, the opening will be held this April by U.S. designer Vladimir Kagan. Owners of The Marmara Hotels, Kiska Holding bought the historical Çinili Turkish Bath in Fatih in 2010. Meanwhile, renovations of the historical Beyazıt Turkish Bath are still ongoing.

EVEN FASHION SHOOTS ARE BEING HELD IN TURKISH BATHS

These luxurious Turkish baths are drawing in significant interest from foreigners and have also caught the interest of a number of internationally famous brands.The historical Turkish baths have recently been used as the locations for fashion shoots and just last week luxurious brand Louis Vuitton shot their 2012 catalogue at the Hagia Sophia Turkish Bath.