A speed train promise from Edirne to Kars 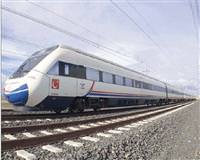 Prime Minister Recep Tayyip Erdoğan delivered good news to citizens of plans for adding addition speed trains throughout the nation. Stating, “We have drawn up our road map,” Erdoğan announced that within the next ten years, Turkey’s speed train system will connect to Kars, Antalya, Diyarbakır and Edirne.

"After the Ankara to Konya and Ankara to Eskişehir lines, we are now connecting Istanbul, Sivas and Bursa to the high speed train system," states Erdoğan. "Within the next ten years, our fellow citizens from Kars, Antalya, Diyarbakır and Edirne will also enjoy these benefits. We have completed all necessary planning and have drawn up our road map."

Erdoğan went on to deliver the following messages during his Address to the Nation:

THE ECONOMY IS A NATIONAL CAUSE: "For us Turkey's economic growth and increasing prestige is a national cause. Unlike others, we are not in pursuit of staging a verbal show in front of microphones and cameras in the name of the love of our country. Our show is our accomplishments. Our show is the construction sites that work like clockwork throughout the nation. It is the public housing we have built for our citizens."

MARMARAY IS THE GOLDEN LINK: "We have held the first rail-welding ceremony for the Marmaray project. Marmaray is the golden link of the Silk Road, which spans from Beijing to London. If it wasn't for certain judiciary rulings we would have been four years ahead on this project. We are building approximately 40 stations on both the European and Asian sides. The Marmaray Rail will transport 75,000 passengers in a single direction per hour. One train will be able to take off every two minutes on these lines. The transport time between Üsküdar and Sirkeci will drop to just four minutes."

REPUBLIC DAY GIFT: "The Marmaray Rail will begin operating on Republic Day October 29th, 2013. The project will significantly relieve Istanbul's traffic and will provide serious fuel economy. However, the most important factor is that it will save a lot of time."

"We have made the necessary plans"
Prime Minister Erdoğan states, "We are now connecting Istanbul, Sivas and Bursa to the high speed train system. Meanwhile, we have already held the tender for the Ankara-Afyon section of the Ankara-Izmir high speed train route and soon we will begin the construction of this line. Within the next ten years, our citizens from Kars, Antalya, Diyarbakır and Edirne will be able to benefit from the same comfortable high speed train transportation options that my citizens from Konya and that my citizens from Eskişehir enjoy now." Erdoğan explains, "We have completed all the necessary planning."