PM Erdoğan to take an initiative for nuclear energy 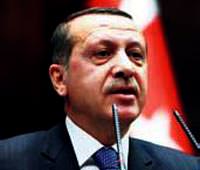 With the intentions of expediting the nation’s nuclear efforts, Prime Minister Recep Tayyip Erdoğan, is preparing to publish a memorandum which will act as a form of alert.

Prime Minister Recep Tayyip Erdoğan is preparing to publish a memorandum which will qualify as a sort of warning to all bureaucratic offices involved in Turkey's nuclear efforts to get things moving.

The memorandum, which is being penned at the Prime Ministry, will not only underline the importance placed by Prime Minister Erdoğan on the nation's nuclear efforts, but will also request that all nuclear efforts be expedited. Erdoğan will also request that close attention be paid to the development of any possible hitches in connection to the upcoming building of a nuclear power station and will deliver the following messages to state establishments: "Let's get moving on our nuclear efforts and ensure that everyone is fulfilling their duties in a timely manner. Nuclear policy is of strategic importance for Turkey. Let's be more diligent." Meanwhile, a decision has been reached in principle for the Prime Ministry to also begin preparing a text that will define Turkey's nuclear vision.

INCLUDING NUCLEAR EFFORTS IN THE CONSTITUTION

There are also plans to prepare a nuclear strategy document which will become a constitutional entity and will mark the first time Turkey has ever drawn up the nation's nuclear vision. This document is expected to be even more comprehensive than the one prepared in 2004 by Turkey's Atomic Energy Authority and to emphasize that Turkey's energy needs must be provided by nuclear energy. It has been learned that due to his interest in the matter, Prime Minister Erdoğan may attend the Second Nuclear Security Summit held in the South Korean capital Seoul on March 26th and 27th.

Erdoğan intends to alert bureaucracy to "be more diligent" in regards to nuclear efforts in Turkey, which will have made a sixty billion dollar investment by the year 2023. By that time, the government plans to have built three nuclear power stations. Each one costs 20 billion dollars.