Turkey headed for a culture and tourism record 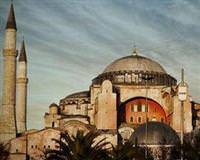 Turkey has now begun to reap the fruit of significant investments made in the tourism industry. In 2011, 31 million tourists came to Turkey, while tourism revenue soared to 23 billion dollars.

Turkey is fast on its way towards becoming a global favorite for culture and tourism. Minister of Culture and Tourism Ertuğrul Günay announced tourism figures from 2002-2011. According to the cultural and tourism data, compiled by the ministry for the first time ever, in 2002, 13.2 million foreign tourists came to Turkey. By 2011, the number of foreign visitors reached 31.4 million, marking a 137 percent increase.

At a meeting held by Minister Günay at the Cultural Assets and Museums General Headquarters, he announced that the figure for tourism revenue, which was at 11.9 billion dollars in 2002, reached 23 billion dollars in 2011. Günay also stated that the numbers of visitors to museums and historical sites in 2011 increased to 28,462,893, which is a 13 percent increase compared to figures from last year. Revenue also increased significantly with figures soaring from 170 million liras to 253.9 million liras."

NINETEEN ADDITIONAL CULTURAL CENTERS TO OPEN SOON
During the meeting, Minister Günay explained that in 2002, the ministry had 42 cultural centers and in 2011, they now have 84 and revealed plans to open an additional 19 cultural centers by the year's end, which will bring the total number up to 103.

Günay also emphasized that contrary to popular belief; they have not drawn back on support to the nation's theaters and have actually increased funds designated to the theatrical arts. Günay states, "While our number of state theaters has increased from 4,000 to 5,785, the number of national opera and ballet tours has increased from 98 to a whopping 478 tours in 2011. In addition," explains Günay, "in 2011 private theaters were given 3.5 million liras in support."