We are now neighbors with China 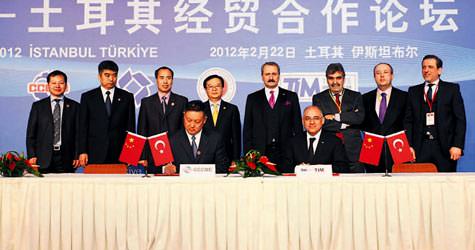 During Chinese Vice President Jinping's official visit to Turkey, the two countries embarked upon a significant number of collaborative agreements that will in effect draw them together as if they were neighboring nations. Spanning from airlines to banking, 4.3 billion dollars worth of contracts were signed yesterday in a wide variety of sectors.

China's Vice-President Xi Jinping was accompanied by a committee of over 100, who arrived with investment and development intentions which resulted in the signing of a record–breaking number of joint agreements.

At yesterday's Turkey-China Economic and Trade Collaboration Forum alone, 28 contracts were signed on a series of projects spanning from aviation to banking. Minister of Economy Zafer Çağlayan expressed that with the Central Bank's currency swap agreement, China may purchase Turkish bonds.

"We are expecting China to show an approximate three billion dollar demand in bonds," states Çağlayan, who also mentioned that they have intentions to significantly develop relations between the nations. Minister Çağlayan also expressed that the objective is to reach a 50 billion dollar trade volume between the two nations by 2015, which would then soar to 100 billion dollars in 2020.

'WE ARE PLEASED WITH THE SUCCESS'
During his address at the forum, China's Vice President Xi Jinping stated, "Turkey has become one of the most attention-drawing nations. The Chinese public is very pleased with Turkey's success. Significant strides have been made in furthering joint relations. We are building mutual political trust. Situated at either end of the Asian continent, Turkey and China harbor characteristics that compliment one another. Chinese companies have signed on to over ten billion dollars worth of contracting agreements in Turkey."
Mentioning that interest by Chinese companies has increased, Jinping expressed that the Chinese government would soon begin offering support to Chinese firms for investment. Xi Jinping went on to state: "We need to delve deeper into solid collaboration. We need to further develop collaboration based on mutual benefits such as in transportation and communication. Finance and renewable energy must be assessed together. The global financial crisis still exists and both China and Turkey need to take a step to liberalize trade and investments in order to add momentum to the improvement of the global economy."

THY gains strength with five new flights
Turkish Airlines, one of the leading Turkish firms to express an interest in China, is currently in negotiations to add new flights. THY General Manager Temel Kotil shared that they currently have a long list of locations in China they would like to fly to, however they are planning on adding flights to five destination points. "We are also planning on adding additional flights to our current services to two specific destinations," states Kotil, adding that they are especially interested in flying to regions where industry is in development. Kotil also mentioned that their objective in flights to China is to draw in transit passengers from a number of destinations, primarily including Africa.

Bank of China to come to Turkey soon
Interest in Turkey's banking sector spans as far as the Far East. Bank of China has reached the final phase of setting up in Turkey. China's Banking Regulation Commission Vice-President Wang Zhaoxing states, "We have held meetings with the Banking Regulation and Supervision Agency (BDDK). You may see Bank of China in Turkey very soon. There is a lot collaboration to be had in the area of finance."
Zhaoxing also mentioned that Turkish banks could also invest in China and reiterated the great potential for the two nations to collaborate in the area of finance.

Ziraat Bank could be headed to China
Deputy Prime Minister Ali Babacan reminded that last year a Chinese bank had been granted a license to open a branch in Istabul and since then has begun operating. As for banks form Turkey going to China, Babacan stated, "It could be Ziraat Bank, or it could be another bank, however it would be much more beneficial for the bank to be established in China and have obtained licensing. We are open to the possibility," states Babacan.

100 million dollar thermal investment
The energy sector was another area that drew in significant investments from China. Having signed on to a 100 million dollar investment with Hattat Holding, AVIC International Vice-Chairmen Liu Jun states, "We will be operating a mine in Amasra as well as investing in a thermal power station. In addition, we are also currently holding deliberations for new investments in the same industry." Explaining that their investments plans are exclusively focused on coal mining and thermal power plants, Liu Jun shares that their total capacity is 1.320 MW.