A historical partnership with Turkmenistan 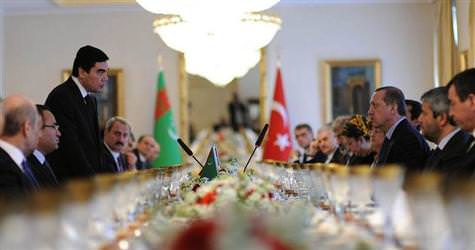 Turkmenistan State Leader Berdimuhamedov’s first trip after being elected was to Turkey. During his time here, eight agreements in the economy, legal and tourism sectors were signed between the two nations.

Turkmen State Leader Gurbangulu Berdimuhamedov signed on to a number of historical agreements during his trip to Turkey, which has laid the foundation for the further strengthening on the current economic collaboration between the two nations.

Following a meeting held between committees, the two countries signed eight agreements in the economy, legal and tourism sectors. President Abdullah Gül and Berdimuhamedov both signed a, "Joint Memorandum on the 20th Anniversary of Establishing Diplomatic Relations between the Two Nations." While another agreement signed between the two nations, entitled "A Memorandum of Understanding on Collaboration on Water," foresees Turkish firms processing and operating water sources in Turkmenistan. The "Agreement on Tourism Incentives", offers the potential for Turkey's five-star hotels to open up in Turkmenistan. Meanwhile, according to the judicial agreements signed, Turkey will relay its experience in legal matters and terrorism to Turkmenistan.

PRODUCTION TO BE PROMOTED

Today, Berdimuhamedov will be attending the Turkish-Turkmen Business Forum, held at the Çırağan in Istanbul by Turkey's Union of Chamber and Commodity Exchanges (TOBB) and the Foreign Economic Relations Board (DEİK). There will be 273 firm representatives present at the forum where the potential of developing collaboration in fields of mutual interest such as energy, textiles, transportation, communication, tourism, construction and banking will be evaluated. Within the framework of the close relations harbored between the nations, the establishing of joint operations and production facilities will be encouraged.

Berdimuhamedov states that as of 2011, the trade volume between the two nations has reached four billion dollars. When compared to figures from 2010, this shows a 25 percent increase. Berdimuhamedov also noted that in collaborations, they will be working with the Turkish side on issues including building new industrial facilities, on innovative and scientific developments as well as in establishing an industrial community. Berdimuhamedov also reminded that in the area of culture, in 2001 they worked on the restoration of TİKA and Sultan Sancar's shrine.

With hydrocarbon reserves equivalent to 70 billion tons of coal, Turkmenistan will be receiving support from Turkey in order to process these resources. Berdimuhamedov has supposedly requested Turkey be further involved in the processing of hydrocarbon, which is the source for natural gas. Hydrocarbon exploration will be conducted by TPAO.