Iraq’s energy is in the hands of a Turk 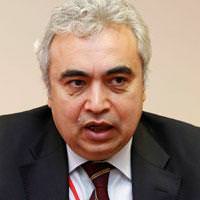 Birol and his team spent February 27th to February 29th in Baghdad meeting with Iraq's high-level energy officials. In October, 2012, the International Energy Agency will be releasing an 'Iraq Energy Strategy' report, which will be a world's first.

This report, which will be the first to explain in detail Iraq's energy sector, is highly supported by Iraq Deputy Prime Minister Hussain al-Shahristani. During their stay, Fatih Birol and his team met with Hussain al-Shahristani as well as a number of related ministries and representatives from the private sector.

If Iraq is unable to reach the eight million barrel production target, which would be equivalent to the highest production increase ever in all producing countries, difficulties may be faced by all of us in terms of tension in the global petroleum market. Developments in the Iraqi energy sector are of vital importance for Turkey. Advancements in both the petroleum and natural gas sectors in Iraq are extremely important from the aspect of Turkey's transporting these energy resources to Europe and other countries. In addition there are a number of Turkish companies that are making investments in both Northern Iraq in general as well as in the nation's petroleum, natural gas and electricity production sector. The 'Iraq Energy Strategy Report' will also point out new opportunities for Turkey as well as for other nations. The improvement of Iraq's economy from the revenue that will be brought in by both petrol and natural gas will also be extremely significant for Turkey in trade overall, in addition to the energy sector."