The world still await answers in the Atlas Jet crash 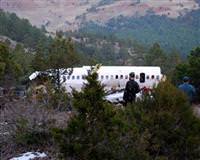 While Atlas Jet persists in refusing to respond to suspicions surrounding the accident brought up in the press by SABAH, they have once again conjured up a new excuse to evade their responsibility and are now saying, “The plane wasn’t ours it was leased.” On top of all that, they went so far as to sling mud at SABAH for publishing information on evidence and confidential documents included in the case file.

The accident took place on November 30th, 2007, when an Atlas Jet plane took off from Istanbul for Isparta and crashed in Keçiborlu, just 18 kilometers' away from Isparta. Everyone on board was killed in the crash.

Atlasjet has once again refused to answer the questions that have surfaced since SABAH released information from pertinent documents involving the Isparta accident case. As the public awaited in anticipation for answers, yesterday's press conference held to supposedly respond to the allegations was a complete bust. The firm failed to present even a single document or information that would rebuff allegations. In fact, by not even referring to specific SABAH articles which have aroused questions surrounding the case, they basically chose to break their promise to provide answers. Instead, they tried to deny their responsibility by emphasizing that the plane was leased.

Having leased the plane from World Focus Airlines, Atlas Jet's persistence in blaming them for the accident has resulted in reactions from victims' families. Victims' families say, "Our loved ones who we lost in the accident, purchased a ticket from Atlasjet, because they trusted the brand. No one told them the plane was leased or not their own. To say that they are not responsible is completely unscrupulous. Now, when people board an Atlasjet plane, I wonder if they are concerned whether it has been leased."
.
NEW QUESTIONS HAVE SURFACED

The documents brought up by SABAH included proof that the airplane leased from World Focus by Atlas Jet had been flying without permission on the day of the accident as well as five days prior.
SABAH also revealed information that Jetsan, the firm which does all the technical maintenance for World Focus didn't even have entrance authority to Istanbul's Atatürk Airport, a fact which was entered into the SHGM inspection reports.

Reports also revealed that the plane's routine maintenance was not up to date. It was known at the time that World Focus was on the brink of bankruptcy due to a debt of over 500 million euros.
The question remains, why is it that Atlasjet and SHGM officials allowed this plane to fly?

1. On November 30th, were families of the victims approached by the firm and offered 25,000 dollars to not go to court.

2. How many families did you make an agreement with? How much did you pay out to these families?

3. Is it true that the Civil Aviation General Headquarters lifted their regulations on outside leasing for Atlasjet only?

4. There are claims that the contract signed by Atlasjet and World Focus came to an end on November 25th, 2007 however the plain was still flown despite not having permission. During the time of the accident, did the plain have permission to fly.

5. A report by a legal expert states that the pilot's flight license was insufficient. In addition, there are claims that neither pilot ever worked for another establishment. Why did you employ pilots lacking in training?

6. How do you respond to the legal expert report's findings that the plane had technical errors and shouldn't have been flown and that the pilots' licenses were insufficient?

7. What documents or information were the basis for the announcement made by General Manager Tuncay Doğaner immediately following the accident, in which he stated the accident was a pilot error and there were no technical errors in the plane?

8. Do you have any official or non-official connections with SGHM Accident Investigation Team Chairman Feridun Seren, who has since been revealed to have disconnected and confiscated the black box from a plane accident in which BBP Leader Muhsin Yazıcıoğlu lost his life?

9. Do you know where the black box from the plane involved in the Isparta accident is currently located?

10. As a firm, have you conducted your own internal investigation into this accident, which has left so many questions unanswered?

11. We have published documents that reveal the black box is missing and that records have been erased. As an airline company what is your response to this?

12. Do you have any information on the accident investigation report prepared by American experts?

13. How do you respond to the request made by SHGM Manager at the time Ali Arıduru, whose name has also surfaced in WikiLeaks, by the U.S. consulate to not inform the Turkish public of findings uncovered in a report prepared by investigative specialists from America?