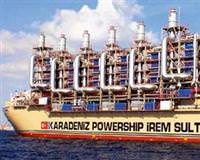 Based in Yozgat, Erensan has become one of two companies in the world capable of producing energy on the deck of a ship from the steam emitted from wastewater. Nine ships, currently under construction, will soon be bringing electricity to one million people in Pakistan and Iraq.

Turkey's SME's are gaining voice in the global energy market. The Erensan firm, which has operations in Istanbul and Yozgat, has become one of the two countries in the world capable of setting up an energy power plant aboard a ship. Erensan, which is also noted for having Europe's largest and Turkey's sole heating laboratory, has now built mini power stations using a boiler system on nine different ships. These specially designed boilers provide 30 percent energy efficiency.
Erensan General Manager Efkan Çeviker explains that they are seeing great foreign demand for the 15 meter-high and 100 ton wastewater boilers the firm has developed, and states, "There are 60 engineers working in Erensan's Research and Development Department. These boilers we have developed have initiated a new era in the sector and Turkey has now become an authority."


Noting that before Erensan there was just one company in the world, a Danish firm, that manufactured 'wastewater boilers', Çeviker states: "We installed the boilers on an energy ship belonging to Karadeniz Holding. These boilers decrease energy costs by 30 percent. Of course, the process involved significant Research and Development work. A number of systems were implemented for the first time in the world on this ship, which alone can provide the electricity needs for a city with a population of 200,000. Right now, ships are producing electricity in countries such as Pakistan and Iraq."

The company's innovations are not limited to those already mentioned. Erensan is also deeply involved in energy efficiency, and has developed a system of regenerating energy from waste gas and water steam. With boilers that are able to redirect steam and exhaust emissions generally released as waste by factories into viable energy sources, Erensan provides energy efficiency that will be reflected on electricity bills in the manner of decreases down to 40 percent.

The French Atlantic Group, which rakes in 840 million Euros in annual revenue from operations in the air conditioning sector and has 4,200 employees, purchased 25 percent of Erensan, joining the firms at the end of 2011. As part of the partnership agreement between Erensan and Atlantic, Erensan will now be producing a number of boilers and heating systems included in Atlantic Group's product range.