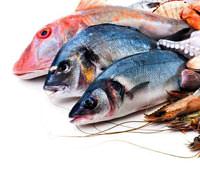 In the past ten years, Turkey has tripled the nation’s fish exports and now, one out of every four bream and bass sold in Europe come from Turkey.

As a result of policies put in place by the Food, Agriculture and Husbandry Ministry, during the 2002-2011 period Turkey's fishery industry grew by 264 percent reaching a total of 448 million dollars. Having not only acquired a 25 percent share of the European bream - bass market, according to the Ministry of Food, Agriculture and Husbandry, Ministry, Turkey has also become the number one trout producers in Europe.

Taken under the wing of ministry support in 2003, last year 181 million liras were funded for fishery product farming. Over the past ten years, a total 737 million liras was offered in support for the fishery industry. Turkey is currently the third largest growth country in the world in terms of fishery production. In 2002, production was at 61,165 tons, whereas in 2011 that figure increased by almost 202 percent reaching 185,000 tons. At present there are 1,720 inland facilities operating with a total 197,000 ton capacity and 368 sea fish facilities operating with a total 174, 521 ton capacity. There are also 279 additional facilities with a total 59,957 ton capacity that have received all necessary licensing to begin operations soon.

According to data from the United Nations Food and Agriculture Organization, Turkey has now acquired a 25 percent share of Europe's bream-bass market. Turkey is first in Europe when it comes to trout production and is fifth overall in fishery product farming. During the 2002-2011 period, Turkey has seen a record increase in imports which rose to 448 million dollars. Eighty percent of Turkey's fishery industry imports are made to EU nations.

Aiming to implement environmentally-friendly techniques in order to promote environmental, economic and social sustainability, Turkey's Food, Agriculture and Husbandry Industry began embarked on a 'Nationwide Sea Fish Farming Development Program' in 2007. In an effort to promote the use of artificial reefs, which are used widespread throughout the world to not only establish an area for fish to feed and breed but also in order to prevent illegal fishing from the shore, the Ministry has also initiated the 'Protecting and Developing Fishery Products with Artificial Reefs Project.' A 4.5 million liras fund was designated for the implementation of the pilot program from 2010-2012.