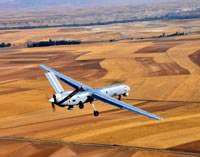 The dates have been determined on a series of national projects geared towards multiplying the military’s strength for the fight against terrorism and increasing Turkey’s competitive leadership.