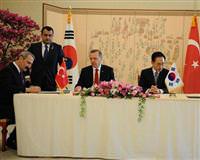 Turkey and South Korea signed a framework agreement for free trade yesterday. Turkey’s first free trade agreement with the Far East will be finalized with the second series of signatures in June. The objective is to increase the bilateral trade volume to seven billion dollars.

Prime Minister Erdoğan's schedule in Seoul yesterday started off with a meeting with South Korean President Lee Myung-Bak. Erdoğan was joined by his wife Emine Erdoğan and daughter Sümeyye Erdoğan during his visit to the South Korean presidential residence known as the 'Blue House'. It was there that the provisional agreement was signed in an effort to increase bilateral trade. "After the necessary preparations are completed, our ministers will come together and sign the related agreements in June at the very latest," said Erdoğan.

TO BE A DRIVING FORCE

FOCUS TO BE ON ENERGY, DEFENSE AND AGRICULTURE

Pointing out that at the end of 2011, the bilateral trade volume between Turkey and South Korea reached seven billion dollars, Prime Minister Erdoğan went on to state the following: "This does not reflect our potential. I believe that as a result of today's signatures and those that will come in June; this figure will increase to the level we desire. This will also allow us the opportunity to fix the import-export trade imbalance. There are a lot of areas where we could act jointly such as energy, defense collaborations, agriculture, ship building as well as the motor industry. It is also possible to take significant steps together in information technology. We have very clearly seen the positive results of the Free Trade Agreements we have signed thus far. We eagerly awaiting the month of June."

Economy Minister Zafer Çağlayan commented on the yesterday's provisional agreement signing by stating: "This agreement marks the first free trade agreement signed by Turkey with the Far East. For a certain period of time, we will be cancelling out mutual customs on industry and agricultural products. In the five years following the approval process for Korean industrial products and in seven years for our industrial products we will be zeroing out. Meanwhile, for the first time ever, the agricultural sector was an item included in a free trade agreement."