Turgut Özal; the man who left a significant impression on the history of democracy 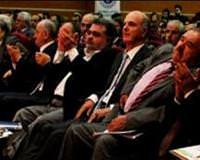 Istanbul Aydın University commemorated former President and Prime Minister of Turkey Turgut Özal for his great contribution to change and the significant mark he made on the nation’s democratic history through reforms on the 19th anniversary of his passing.

A conference entitled "Remembering and Understanding Turgut Özal" was held at Istanbul Aydın University's Florya Campus in conjunction with the Malatya Civil Societies Organization Union (Mastöb). The conference, held to commemorate the 19th anniversary of the death of Turkey's eighth president the late Turgut Özal, began with the showing of a documentary on the former leader.

Later, during an address by Istanbul Aydın University Rector Prof. Dr. Yadigâr İzmirli, he stated that the effects of the changes Turgut Özal made for our country are still evident today and that those changes continue to show their effects and today those changes would have been considered reforms.Speaking at the event, MASTÖB Chairman Bekir Alyüz stated that this collaboration with Istanbul Aydın University was extremely significant academically and that in order to best understand the reforms taken on by the late President Turgut Özal, it was necessary to first know more about him.

AHMET ÖZAL: "THERE WAS DEFINITELY 'FOUL PLAY' IN MY FATHER'S DEATH"

The late Turgut Özal's son, Ahmet Özal answered questions from the press following the conference held in his father's honor. When asked to comment on his father's death, Özal stated that an investigation by the State Supervisory Council (DDK) is still ongoing. Explaining that the attorney general is also still looking into the incident, Özal stated, "We will all see the truth together when the report is released. There is the term 'foul play' in football, and there was definitely 'foul play' here. This report will reveal who fouled who."
Explaining that a number of secrets in Turkey will soon be revealed, Özal went on to state the following: "The areas which have remained uncovered, and began in the 1990's with the death of my father, are slowly beginning to come to life. Prime Minister Recep Tayyip Erdogan also explained that the Turkey now is no longer the country it was. This needs to be well understood. I am of the opinion that whatever information is being held back needs to come out. Nothing will remain secretive anymore. These are beneficial things for Turkey. The Ergenekon issue may be difficult or painful for some in Turkey. However, this needs to happen so that Turkey is never forced to look back again. This book needs to be closed and come to an end."