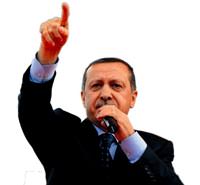 Prime Minister Erdoğan’s reaction to S&P's rating drop by saying “We no longer recognize you,” has ignited a global revolt against credit rating agencies. While support has been raining in from abroad, Europe is now determined to establish its own rating firm.

Prime Minister Recep Tayyip Erdoğan's response to Turkey's positive credit rating being dropped down to stable by Standard & Poor's, was echoed throughout the world. The Prime Minister's statement that he no longer recognizes S&P was widely supported by a number of establishments and individuals.

The U.S. rating institutions S&P, Moody's and Fitch have been accused of conducting a targeted operation that fueled the 2008 crisis, by downgrading EU nations' ratings. As a result, the European finance sector's big players have begun to take important steps towards establishing alternative solutions.

IT WAS AN INCORRECT DECISION

The first show of support following the Prime Minister's announcements came from Timothy Ash, the Chief Economist for the Royal Bank of Scotland (RBS). Tim Ash, who has written a number of negative reports on Turkey in the past as the RBS head of the Emerging Markets Department, stated that S&P's decision to downgrade Turkey's rating from positive to stable was an error in decision. "Erdogan is right," states Ash, "Turkey's rating is wrong. Turkey has not gone into default, it hasn't been subjected to financial restructuring and it is a strong country with high solvency. It definitely deserves to have a higher rating."

TURKEY IS IN A POSITION OF ENVY

Rosa points out that Turkey's growth performance is enviable and that the role of the nation's banking system was huge. Mentioning that Turkey's rating has for some reason not been raised to 'investable' Rosa states, "Credit rating institutions are a serious problem. I believe that they did not pass the test when it comes to the economic crisis. While they should be providing the necessary warnings prior to the crisis, they remained completely quiet. Meanwhile, they choose to make unfounded yet serious note revisions on certain countries. It is very obvious that credit rating institutions deepen the economic crisis."