Turkey and its firms are our strategic partners 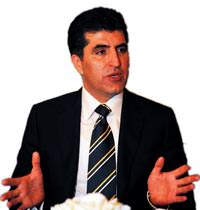 In an interview, Prime Minister of the Northern Iraq Regional Administration Nechervan Barzani referred to Turkish firms as ‘strategic partners’.

Statements made by Nechervan Barzani , who took over the position of Prime Minister on February 18th, appear to be geared towards a policy of establishing closer relations with Turkey. Meanwhile, Barzani refers to Turkey as 'a strategic partner'.

In an interview with Barzani held at Koç Holding's Divan Hotel in Erbil, the Premier expressed how important it was that Koç Group was in Erbil and that he is expecting other big groups to also come. Barzani explained that they are trying to promote the establishment of strong relations with Turkey from every aspect, however, he explains, certain companies have had difficulties investing with even some who have been waiting for over two years to be granted permission.

"We are currently in a transitional period and of course there will be difficulties and also successes." Barzani explains that they do not want anyone to give up due to these difficulties and states that therefore they have established a special commission in order to find solutions to the issues.

When asked about the security of the region and when reminded of Turkish businessmen's concerns in this regard, Barzani responded by stating, "Based on all of the indicators, I can honestly say that the region is one hundred percent safe."

Energy is of vital importance for Northern Iraq. Barzani approves of the plan to deliver petrol to Europe through Turkey. Barzani explains that they hope Baghdad will also participate and says that they are also working on benefitting from Turkey's experience when it comes to refined petroleum.
Barzani explains that they are about to build two refineries, one of which will be built by Genel Enerji, and will have a processing capacity of 60,000 barrels daily. When asked if TPAO has expressed any interest, Barzani stated, "They want to participate and we hope they do."
Iraq's petroleum revenue is increasing and it appears the per capita income in the nation under construction is also fast on the rise. Barzani shares that at present the per capita income is at 4,500 dollars on average and is increasing daily. "Our trade volume with Turkey has reached eight billion dollars. In addition, this doesn't include contractor services," says Barzani.
When Barzani was elected, the first congratulatory messages came from Prime Minister Recep Tayyip Erdoğan and Foreign Affairs Minister Ahmet Davutoğlu. Barzani commented on this situation, by stating "They called me for the first time and it was very important to us. Hopefully I will visit Ankara as soon as possible."
In regards to Maliki's comment that Turkey aims to interfere in Iraq's internal affairs, Barzani stated, "I don't think Turkey has tried to interfere in Iraq's internal affairs, Turkey has always tried to play a charitable role for the developments which have transpired in Iraq."
It is our constitutional right to sign with Exxon
The discretion between the Baghdad and Northern Iraq administration regarding the distribution of profit from petroleum has recently reached a level of extremity.
Northern Iraq receives 17 percent of all petroleum revenue; however Baghdad tends to act slowly in distributing Northern Iraq's share. In addition, the fact that Northern Iraq has acted independent of Baghdad and reached an agreement with the United States' Exxon Mobil on petroleum from their own region has resulted in intensifying the tension between the two administrations.

Barzani explains that although Baghdad does pay out their rightful share of petroleum revenue, there are always difficulties involved. Barzani reminds that according to the constitution, the petroleum in Iraq is everyone's right and states that therefore they want to receive their 17 percent hassle-free. Barzani believes that these constitutional, rights are behind Exxon Mobil's preference to work with Northern Iraq rather than Baghdad.