A contradictory defense from Standard & Poor's 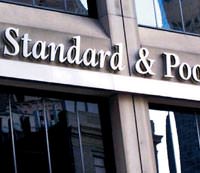 While trying to defend their decision to downgrade Turkey’s credit rating from positive to stable, a representative from Standard & Poor’s, exposed the rating institution’s lies.

During a meeting yesterday in Istanbul, an S&P's analyst responded to the question "Europe's is sinking, don't you think it was wrong to downgrade Turkey's credit?" by responding, "Their per capita income is higher than Turkey's." Meanwhile, S&P's currently rates India higher than Turkey, despite their per capita income being one tenth what Turkey's is.

After downgrading Turkey's rating on the very same day they upgraded Greece, Standard & Poor's has been the recipient of significant criticism and reaction including from the likes of Prime Minister Recep Tayyip Erdoğan and IMF Chief Christine Lagarde. While trying to justify their reasoning during a meeting held in Istanbul yesterday, instead S&P's practically admitted to applying a double standard.

By stating that they base ratings on national income figures, S&P's exposed their own lie, simply on the basis that they have issued higher ratings to a number of nations' whose per capita income rates are lower than Turkey's.

The meeting was held yesterday between S&P's Operations Director Paul Coughlin, Turkey District Manager Zeynep Holmes and Turkey Chief Analyst Eileen Zhang, who also personally signed the downgrade report. The three S&P representatives started off by emphasizing the successful performance exhibited in Turkey's economy over the past ten years. When asked by journalists why it is they chose to downgrade Turkey's rating, the institution's representatives provided a series of quite interesting responses.

TURKEY'S PER CAPITA INCOME IS LOW

Zhang, who not only wrote the report for Turkey, but is also responsible for Italy and Portugal, expressed that country ratings are based upon per capita national income. "Turkey's per capita income at five to ten thousand dollars is in the medium range. Those nations' per capita revenue is higher." Although Coughlin agreed with Zhang, he also stated that they have dropped European nations' ratings.

A NATION WITH ONE TENTH THE INCOME MADE INVESTABLE

Paul Coughlin, in charge of operations for S&P's, responded to Erdoğan's remarks following the downgrade announcement: "The Prime Minister's statements are not unusual for us. We receive similar reactions from other nations. You may recall the American government, Spain and Ireland. It may appear to be an attack on the Turkish economy but we are actually pointing out the problems. These sorts of emotional responses are not at all unusual for us. It doesn't affect our concentration."

District Director Zeynep Holmes also responded to the reaction which surfaced following S&P's downgrade. "There are those who do not agree, but it is also not beneficial to think about it as wrong or right. This is just one viewpoint. We evaluate 127 countries. The same transparent and clear criteria are used for each. We used the same criteria to evaluate Turkey." When asked if they would consider announcing they were wrong and apologize, Holmes stated, "We are not planning on apologizing."