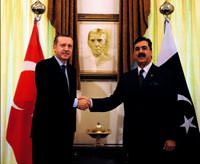 In an effort to increase collaboration, Turkey and Pakistan signed nine different contracts yesterday. A district will be especially designated for Turkish investors.

During his official visit to Pakistan, Prime Minister Recep Tayyip Erdoğan and his accompanying committee consisting of ministers, signed on to a new era in both Pakistan and the nation's economy. The two nations released a joint declaration yesterday during the second meeting of the Turkey-Pakistan High Level Cooperation Council intending to increase economic ties.

In the declaration, Prime Minister Recep Tayyip Erdoğan and Pakistani Prime Minister Yusuf Ziya Gilani made a call for investments in the energy, construction, steel production, urbanization and agriculture based industries.

The declaration also stated that incentives would be offered for trips by mutual committees in the effort to increase trade and investments in areas involving textiles, textile machinery, automotives, the agricultural industry, the food processing industry as well as in other areas of potential.

The declaration went on to state, "For Turkish firms interested in investing, Pakistan will be creating specially designated investment districts in addition to offering incentives packages. Collaborative efforts will be ongoing to develop further relations with Central Asian nations as well as in order to ensure that regional collaborative efforts operate healthily."

The declaration also noted that in addition to the nine contracts signed, there will be a focus on joint production and research-development in the defense industry. The agreements signed involve renewable energy, collaboration on highway transportation as well as establishing a technopark.