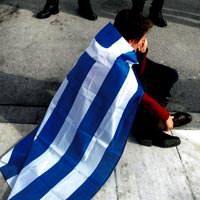 International investors are currently planning their exit strategies out of Greece. Electronic firm Dixons plans to shut down 100 stores, while alcoholic beverage firm Diageo, which is experiencing a fifty percent drop, plans to cut spending.

Foreign investors appear to be following in Turkey's footsteps as they take a step back from Greece, which following the debt crisis, may soon be forced to abandon the Euro zone. British electronics retailers Dixons is now planning to shut down 100 stores in Greece, 69 of which are wholly owned. Dixon's operations in Greece constitute just three percent of the firm's total 8.2 billion pounds in global revenue.

Diageo, which boasts Johnnie Walker and Smirnoff labels as well as many others, will be minimizing spending in the Greek market after a fifty percent drop in sales over the past three years. According to Diageo's Marketing Director Andy Fennell the firm is waiting to see whether or not Greece will be abandoned by the Euro Zone.

According to consulting and tax services firm KPMG partner Roger Bavly, Greece is preparing to stage a drachma with the fast cash exit coupled by the increasing weight of debt, the decreasing consumer spending and the potential exit from the euro zone which has pushed a number of countries to prepare an exit strategy. "Firms are tracking the cash flow, treasury and incoming fund developments daily."

RESISTANCE DESPITE THE CRISIS

There are still some firms that have decided to continue to struggle in the market despite the ongoing crisis in the nation. They are BMW, TUI, Roche, GlaxoSmithKline and Vodafone to name a few. Koton is one of the Turkish brands that have chosen to see it out. One of the founders of Koton, Yılmaz Yılmaz stated, "We will continue to have a presence in the Greek market with our shop."

IT WILL NOT RECOVER FOR FIVE YEARS

Gizia was one of the brands to stage a quick exit out of the region. Explaining that they closed one wholly owned shop and transferred the other two in a move out of the Greek market, Gizia Chair İsmail Kutlu states, "We exited the market a year ago. We also don't think that it will recover for another five years. There has been a 90 percent drop in the stores we handed over. They won't be able to last long."

İpekyol Chairman Yalçın Ayaydın, who simultaneously shut down eight stores in the Greek market, states; "We made great money at the time in the country. However, we began to see that we were losing money. We could foresee that a country that doesn't produce anything and incurs continuous debt would not be able to recover. With the notion, 'however soon we can get out if this country is best' we immediately staged an exit and thank goodness we did. It was the right decision," says Ayaydın.