THY lays off 305 employees 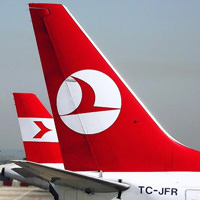 Over three-hundred Turkish Airlines’ personnel members who participated in a slowdown strike staged by Hava-İş have been made redundant.

According to an announcement released by Turkish Airlines (THY), the airline has laid 305 employees off for participating in a slowdown strike by calling in sick, which led to the airline's cancellation of hundreds of flights. The protest was in response to a draft bill passed in parliament which relinquishes aviation personnel's right to strike and stage lock-outs. Turkish Airlines claims the demonstration resulted in two million dollars worth of financial loss.

OVER 100,000 PASSENGERS AFFECTED IN SLOWDOWN

Starting May 29th at three a.m., union leaders exerted psychological pressure and physical intervention to prevent flight crew from boarding planes, states the THY announcement. As a result of the inadequate number of cabin crew, 223 flights had to be cancelled. Including flight cancellations and delays, over 100,000 passengers' flight plans were disrupted due to the slowdown.

Turkish Airlines, which is a publicly traded firm, has decided to sue union leaders and staff which participated in the strike for compensation in order to cover their shareholders' loss. In addition, the airlines will also be filing criminal complaints against those who called for the slowdown strike and were responsible for staging it. The airline also announced that reinforcement personnel will make up for the employees lost and all flight disruptions have since been rectified.