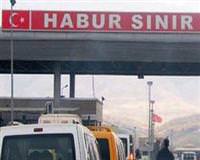 The details of two new borders with Iraq have been finalized. The borders, which will be built between Aktepe and Ovaköy, may also become a wide free trade zone.

Regional Kurdish Administration Nechirvan Barzani recently announced that an agreement has been reached on the location where the new borders will be set up. The new borders will be located five kilometers from the İbrahim Halil border in Aktepe and 20 kilometers from Ovaköy. With the opening of the new borders, Turkey hopes to establish the area as a wide free trade agreement. The Kurdish administration is also in favor of the prospective as an opportunity to vitalize commerce. Once the border is in operation, efforts will then be focused on establishing the area as a free trade zone.

TURKEY-IRAQ BORDER TO MOVE
As a result of the new border, the naturally established Turkish-Iraq border may also be moved. Iraq's Ministry of Commerce has announced that the natural border will be redrawn coinciding with the renewal of the Habur Brook. The Foreign Affairs Ministry is currently working on establishing a solution."

With 12 million dollars worth of bilateral trade, the decision was made to operate two border gates. In 2009, an agreement was signed to open the borders at Şinova and Ovaköy, however approval did not come forth from the Iraq administration. Seventy-percent of exports in the region are done over North Iraq. Barzani, who arrived to Istanbul to participate in the World Economic Forum and met with Prime Minister Recep Tayyip Erdoğan, stated that officials would be meeting again soon to discuss the opening of a new border.


LOCKED AT THE BORDER

Once the issue of opening a new border was established during the meeting between Erdoğan and Barzani, sights were then set on where the border would be located. Officials from Iraq's Ministry of Commerce announced, "Two borders will be opened at the first stage. Efforts have been expedited on opening up the border west of Ibrahim Halil an overall in order to solve the border issue."

'WE HAVE REACHED A CONSENSUS'

The Turkish government wants a total of six border gates to be opened in order to legitimize trade in regions where illegal smuggling is rampant as a means to survive. According to information obtained by the Ministry of Customs and Trade, Turkey plans to take on the financing in both countries for the borders established. Most recently, the state issued a proposal to the ministry of the interior on setting up a border crossing at Uludere-Gülyazı.