A new financial center for Istanbul 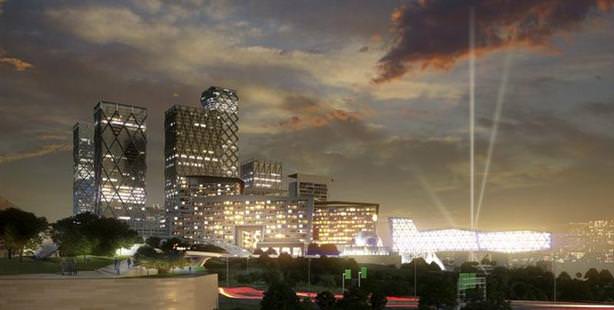 On August 8th, a tender will be held for the 4.5 billion TL Istanbul Finance Center projects, which is expected to be completed in the next three and a half years time.

The first step towards embarking on the Istanbul Finance Center (İFM) project will be taken this Wednesday, August 8th by way of a tender held for the construction of the center's "special projects and recreational areas". The 4.5 billion TL project, which will be completed by 2015, will also include a congress and exhibition center, a hotel, a medical center and commerce centers, the building of which will be held at this first tender.

The 208,000 square meters area devoted to special projects and recreational areas for the Istanbul Finance Center is anticipated to be completed in two years and the revenue acquired will be used in other infrastructure expenditures. Emlak Konut GYO has been assigned to the tender, in which both national and foreign individual proprietorships, private entities or the joint cooperation will be able to bid. This will not however be an international tender. Bids made by consortiums will not be up for consideration. Foreign parties will only be able to participate in the tender in accordance to the regulations dictated by the 4734 article in the Public Tender Act. The acquisition of the parcels, which have been approved for development and blocked off as "Special Project and Recreation Areas", will be offered in a "Land Sales in Exchange for Revenue Sharing" tender. This tender for the 4.5 billion TL Istanbul Finance Center Projects is expected to bring in one billion TL.

The Istanbul Finance Center will be built on a 3,200,000 square meter area and is anticipated to employ approximately 50,000. The center will also include a 3,000 capacity congress and exhibition center, a library, hotel, school, mosque, nursery, medical center, fire station and police headquarters. With a residential population of 11,000, the İFM is anticipated to become a 24 hour lively center.

The Bosphorus University Kandilli Earthquake Research institute has conducted thorough studies on the region. The finance center will consist of smart buildings that are able to produce their own electricity, are environmentally sensitive and have low carbon emissions. In addition, the new finance center will also have an internal communication network, mobile telephone system and parking management system.

Ziraat Bank, Halkbank, Vakıfbank, the Capital Markets Board and the Banking Regulatory and Supervisory Agency will be building their own buildings in the Istanbul Finance Center. If an establishment does not want to build their own building however, then the Ministry of Urban Planning and Environment will take over the task. Those establishments that applied to build were given a seven-month period to draft their projects. The design of the building must be in accordance to the criteria established by the Ministry of City Planning. For example, the doors will be reminiscent of Seljuk architecture and will open up to a courtyard.

It has already been announced that a series of public banks, the Capital Markets Board and the banking Regulatory and Supervisory Agency will be moving to the new finance center. However, now there is also the possibility that the Istanbul Stock Exchange may follow suit. If the move does in fact transpire, than the ISE will share the same building as the Capital Markets Board. The buildings in the center have all been planned to be constructed larger than the needs of the establishment that will be accommodating them.