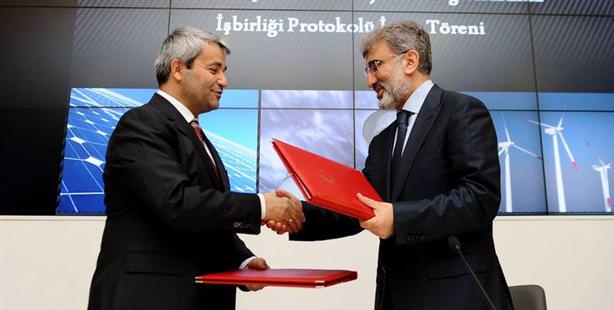 Turkish Scientific and Technological Research Institute (TÜBİTAK) has signed a protocol agreement with the Ministry of Energy geared towards increasing domestic energy production.

TÜBİTAK President Yücel Altunbaşak explains that with yesterday's signing of the protocol agreement between the Ministry of Science and Technology and the Ministry of Energy and Natural Resources, domestic production will soon be on the rise in areas including the design of thermal and hydroelectric power stations, nuclear power station production as well as production technology from renewable energy resources. Altunbaşak says that the protocol will allow for at least a 20 percent increase in domestic energy production over the next ten years.

Also speaking at the signing ceremony, Minister of Energy and Natural Resources Taner Yıldız stated that the progression they will achieve over the next ten years due to the signing of this protocol will be extremely significant in terms of industrializing energy. "In wind energy alone, we will have put a halt to 15 billion dollars in imports. As for nuclear energy, we will produce domestically as much as our technology allows us to."

Minister of Science and Technology Nihat Ergün expressed that parallel to the nation's growth; an increase in demand for energy and intermediate goods is unavoidable. Ergün went on to state, "We researched which investment items we import the most and established an incentive plan accordingly."