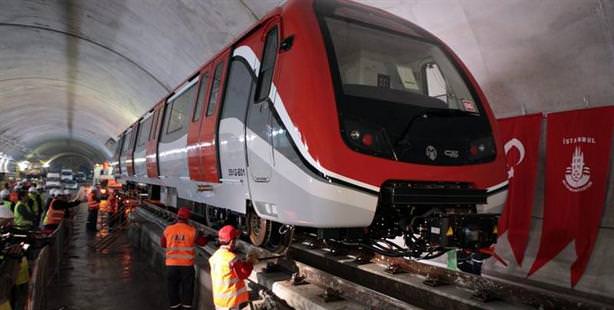 The biggest metro investment since the foundation of the Republic, the Kadıköy-Kartal metro, will begin running today in an opening ceremony with Prime Minister Erdoğan. A 50 percent discount will be offered for the new metro up until October, 29th.

The Kadıköy - Kartal metro, which has been the biggest metro project in the city to date, begins serving passengers today. The metro, which will be officially opened in a ceremony attended by Prime Minister Recep Tayyip Erdoğan, will be dropping the time it takes to commute from Kadıköy to Kartal down to just 32 minutes. In addition, the new line will be transporting 700,000 passengers a day.

The new metro, which cost three billion liras to its completion, will be on offer for a 50 percent discount for passengers from its opening today up until the October 29th Republic Day. The Metropolitan Municipality Assembly approved a joint proposal brought forth by the AK Party and CHP to apply a 50 percent discount on tickets up until midnight on the October 29th Republic Day.

The Kadıköy-Kartal railway system was first conceived in 2002 and intended to service transportation between Harem and Tuzla. The initial ground was broken in 2005 for what was planned to be an over ground railway system, however due to the high energy costs and necessity of shutting down the D-100 highway to traffic, which the line was intended to cross through, the project was abandoned.

In 2008, a new project for an underground railway system was brought to life. In order to make up for the time lost in the previous project, the excavation work was conducted in record speed. By 2009, protocol had been signed with a Spanish firm to provide the coaches. Taking the high demand of the metro line into consideration, railway cars were built to accommodate 2,600 passengers.

The Kadıköy-Kartal line consists of 16 stations, of which the Kadıköy, Ayrılıkçeşme, Ünalan and Göztepe stations were built under sea-level. The average distance between stations is 1,300 meters, with the shortest distance being 800 meters between the Maltepe and Huzurevi stops and the longest distance being 2,300 meters, which runs between the Bostancı and Küçükyalı stations. The full list of the Kadıköy-Kartal metro stops is as follows: Kadıköy -Ayrılıkçeşme- Acıbadem-Ünalan- Göztepe-Yenisahra-Kozyatağı-Bostancı- Küçükyalı-Maltepe-Huzurevi- Gülsuyu-Esenkent-Hastane (Adliye)-Soğanlık-Kartal.

The Kadıköy-Kartal-Kaynarca Metro in numbers

The total length of the double line is 53 kilometers, while the full length of the railway tunnel spans to 65,136 meters, including connection tunnels, shafts and stairways.

The total cost of the Kadıköy-Kartal project is 1,600,000,000 $. With the addition of the Kartal-Kaynarca line, which cost 200,000,000 $ the total cost of the project is 1.8 billion dollars.
A total 120 coaches were purchased for the line. With the addition of the Kaynarca line, the order was brought up to 144. A total 5,350 tons of railway was used and 5,500 connections were welded. The elastomeric bearings used under the railway are the thickest and highest vibration protecting material used in Turkey. The railway system includes a total of 52 entrances, 315 turnstiles, 70 elevators and 264 escalators.

Unlike previously built railway systems, these coaches will be operable without necessitating a motorman when desired. Therefore, parking, and access to repair and maintenance may be conducted by the main control center. Due to the passage-way provided between coaches, passengers will be uniformly distributed. The coaches all contain heating, air conditioning, ventilation, cameras and dynamic road navigation and LCD screens and they have all been isolated for vibration and sound.