THY aims to reach 375 million passengers 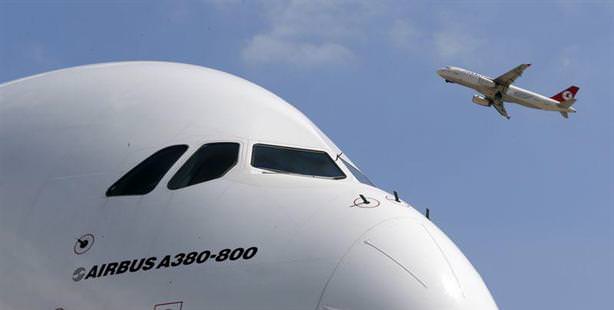 Minister of Transportation, Maritime and Communications Binali Yıldırım announces that Turkey has become one of the top nations in the world in aviation as both a destination and with its service network.

Explaining that they have already reached their 2023 objectives, a decade early, Yıldırım says, "Just because we have achieved our 2023 goal doesn't mean we are just going to lie down backwards. We are now going to change the target, and take it even further. By 2023, Turkey will have become a nation where 375 million people fly to."

The Civilian Aviation and Airports Fair AIREX Istanbul 2012 has opened its door to visitors. Binali Yıldırım was there for the opening of the fair which will be hosting over 150 firms from 30 different nations. In addition, the fair has 1.4 billion dollars worth of planes on display.

Announcing that this year's fair is the ninth, Yıldırım said that despite all of the global negativity, Turkey will continue to manage continuous growth without losing any momentum. Sharing statistics for August, Yıldırım stated, "There is an 18.4 percent growth in domestic lines and 12.5 percent growth in international flights, with a 10.5 percent growth overall. When it comes to the eight month mark, we have surpassed 87 million already and are seeing a 20 percent increase in transit traffic. As a result, this growth brings with it certain limitations and difficulties in terms of the capacity of our airports."
Yıldırım explained that a field study conducted over the past two decades on 10,500 passengers revealed that aviation in Turkey has advanced exponentially. Which is a fact, he says, the citizens in the street are even more aware of. "Citizens from any income group in Turkey, spanning from the retired to businessmen, make on average four flights a year. While in the past, people in Turkey might say, 'I wonder if I will ever board a plane?' Now, we have reached a level where our people comfortably travel on four flights a year. This means that airlines have become the public's lines, the numbers only confirm this fact."

Yıldırım also explained that the sector's revenue has soared from two billion dollars to 16 billion dollars, while direct staff has increased from 64,000 to 160,000. Domestic destinations have doubled, says Yıldırım, "However, we have seen much more striking growth in international lines; we have gone from 60 flight points to 175. At this point, when it comes to the extent of our destination service network, Turkey has become one of the top ten countries."

Yıldırım went on to emphasize that Turkey has already achieved their 2023 goals, before the year 2013. Just because we have achieved our 2023 goal doesn't mean we are just going to lie down backwards. We are now going to change the target, and take it even further. By 2023, Turkey will have become a nation where 375 million people fly to. I am announcing the new target," said the Minister of Transportation, "Everyone needs to make their calculations accordingly. At least one third of these flights will be from Istanbul. We will also be increasing our airports' capacity to over 400 million. By then, we will also have doubled the number of our aircrafts."