A new energy project for Turkmenistan 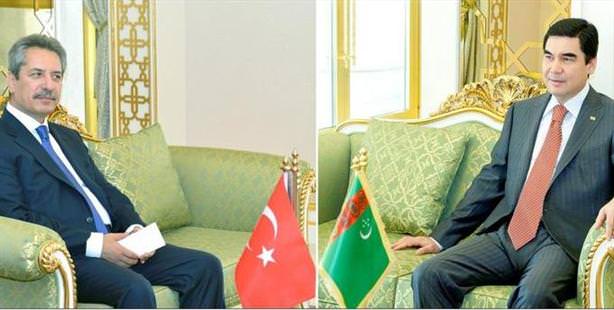 Çalık Enerji will soon be embarking on a mega electricity power supply project in Turkmenistan.

Ahmet Çalık was recently hosted by the Turkmen President Gurbanguly Berdimuhamedov for a meeting where the two emphasized the importance of continuing collaborations into the future.

During the meeting, Çalık thanked Berdimuhamedov for allowing the opportunity to discuss issues surrounding long-term collaborations. "The opportunities granted to Turkish firms and foreign entrepreneurs have helped develop and advance their presence in the Turkmen market," stated Çalık.
President Berdimuhamedov responded by stating that Turkmenistan is constantly trying to develop active relationships based on mutual benefit and expressed the importance they place on developing long-term relations with foreign firms based on sharing equal rights.

A CHANGE IN ENERGY IS VISIBLE

During the meeting, Çalık and Berdimuhamedov also discussed the development of the fuel-energy sector as well as touched upon the issues regarding transformation projects. Chairman of the Çalık Holding Board of Directors Ahmet Çalık relayed information on regarding fulfilling the directives Berdimuhamedov had presented earlier. Ahmet Çalık also presented a number of new proposals regarding the realization of a series of projects geared towards modernizing the entire nation's electricity power sector as well as Çalık Enerji providing a stable electricity power supply to Ashgabat.

After relaying information on improving Ashgabat's energy infrastructure, Ahmet Çalık went on to present the plans and technical details of the new project to the Turkmen president.

The project is planned to be realized within five years' time. The project will take place in three stages. All of the 60 sub-stations included in the build will be connected to the electrical distribution system. In addition, a series of specialists in the project's related areas will be convening.

Çalık Holding Chairman of the Board Ahmet Çalık assured that he would fulfill the project within the timeframe established and in the highest quality, and thanked Berdimuhamedov for bestowing his trust in him. At the end of the meeting, Berdimuhamedov and Çalık exchanged mutual best wishes and emphasized assurances they would reinforce the traditional friendship between the two nations and shared the trust that productive collaborations would continue in the future.