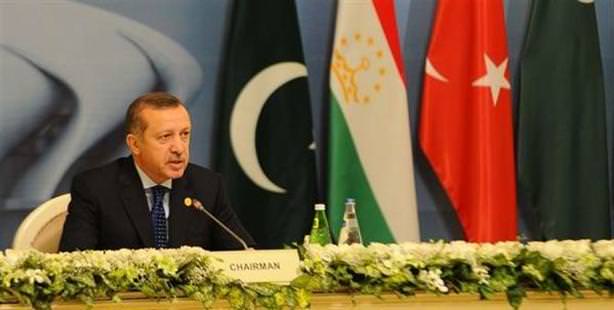 Calling on ECO member nations to increase trade within the organization, Prime Minister Erdoğan stated, “If we follow the free trade regulations we could increase our trade volume by eight times.”

During his address for the opening of the Economic Cooperation Organization (ECO) summit held in the Azerbaijani capital of Baku, Prime Minister Recep Tayyip Erdoğan called on member nations to further develop cooperation. Speaking at the opening, Erdoğan stated, "At 768 billion dollars, the turnover of ECO countries consist of a two percent share of total world trade turnover. This figure is far from representing the true potential of this organization's countries." Pointing out that should a free trade agreement be implemented between ECO countries, trade turnover could increase by eight times, Erdoğan stated, "I therefore invite all members that have signed onto a free trade agreement to be partial to this and for those that are indeed partial to fulfill what needs to be done according to the agreement as soon as possible."

THE SYSTEM NEEDS TO BE RENEWED

Prime Minister Erdoğan went on to talk about the need for a restructuring according to today's standards in order to accommodate the demands put forth by the community both in terms of justice and equity and stated, "This new restructuring of an international system should no longer be focused on solely reflecting the benefits to certain nations or nation-groups and should instead be devised in order to provide responses to expectations on a global level."

"We need to revive the Silk Road"

Prime Minister Erdoğan also pointed out the importance role the transportation sector plays in developing countries and noted that the Silk Road is a significant project that should be revived, stating, "This will be the only way that we can develop the potential of the Eurasia, Central Asian and Caucasus regions."

Everyone should participate in the ECO Bank

Prime Minister Erdoğan expressed the expectation that the ECO Trade and Development Bank will contribute financially to the organization's projects and stated, "It is extremely pleasing that Azerbaijan has now announced their membership to this bank that was founded by Turkey, Iran and Pakistan. I am inviting all member nations to become partners in this bank," stated Erdoğan.

Prime Minister Erdoğan, who was greeted warmly by Azerbaijani President İlham Aliyev, went on to state that the 400 million populations and eight million cubic meter area the ECO represents is strategically placed between the East and West.

This is a translation of an article originally written by Duygu Güven.