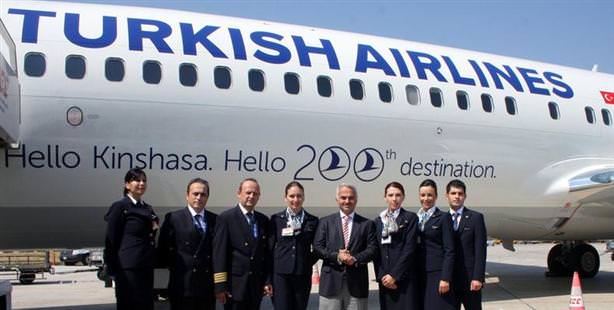 Turkish Airlines introduced their 200th plane, a Boeing 737-900 at a ceremony held at Atatürk Airport.

Turkish Airlines (THY) Executive Board Chairman Hamdi Topçu, ''We are very pleased to have realized our objectives one by one as a company. When we added our 100th plane to the fleet, our objective was to reach 200. Reaching our 200th plane came true sooner than expected. Our goal now is to add our 300th plane to our fleet."

THY held a ceremony in honor of the inclusion of their 200th plane into their fleet, which was attended by Minister of Finance Mehmet Şimşek, THY Chairman of the Executive Board Hamdi Topçu, General Manager Temel Kotil and a number of invited guests.

Stating that Turkish Airlines is in the top league in the aviation sector, Topçu expressed how pleased they are to be associated with the world's biggest airlines and corporations.

''The global economic crisis has shrunk the aviation sector. A number of firms have gone bankrupt or switched hands. A number of national firms tried to stay afloat by taking on partnerships. During this same time frame, Turkish Airlines stayed afloat on its own and continues to grow. We will be continuing to go down this path we are on even faster," stated Topçu.

THY General Manager Temel Kotil stated, "By flying to 90 different countries, we have become the airline that flies to the most destinations in the world. For many people this was a dream up until just a few years ago; however we have made it come true. By adding this 200th plane to our fleet, Turkish Airlines has shown that it has reached its goal."

Expressing that they are more optimistic for their 2023 objectives, Kotil said, "Our target for the 100th anniversary of the Republic is to have the biggest network in the world, to be a five-star airline and to be a leader in our region populated by 1.5 billion people," states Kotil.