Turkey provides Spain with a formula for salvation 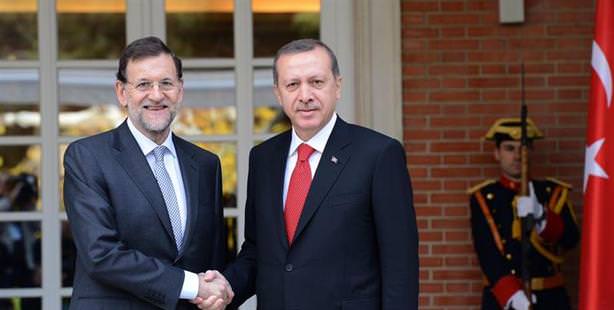 Prime Minister Erdoğan presents a Spain in crisis with a formula for salvation. While Erdoğan called on Spain to not “make any concessions on fiscal tightening,” Spanish Prime Minister Rajoy praised Turkey’s economy.

Explaining that Spain is currently in a similar crisis to the one experienced in Turkey in 2002, Prime Minister Erdoğan stated, "We were able to successfully overcome a similar crisis in a scientific, rational and determined manner and approach based on security and stability. During this period of time we made absolutely no concessions on fiscal discipline. Our stability in both growth and lowering unemployment continues."

Erdoğan commented on Spain's support for Turkey's EU accession process, by stating, "Pacta sunt servanda," while also offering up advice to EU leaders to "gain strength in overcoming the crisis."

WE DON'T BELIEVE IN RATINGS

Spanish Prime Minister Mariana Rajoy thanked Turkey for offering shelter to Syrian refugees.
Spanish Prime Minister Rajoy had many words of praise for Turkey's economy and mentioned that the EU and Spain are both experiencing difficulties. "We congratulate the Turkish government. I wish we were in the same position," stated Rajoy.

This is a translation of an article originally written by Yaşar Önel.