BRIC is outdated; Turkey will secure a spot in the top ten 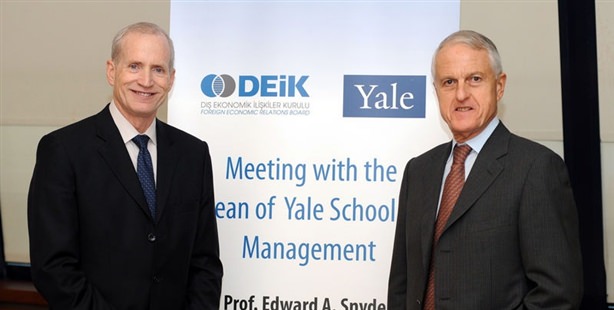 Edward Snyder, Dean of Yale’s School of Management recently praised Turkey’s economy. According to Snyder Turkey reached the level of BRIC countries long ago. “BRIC is a little outdated and needs to be updated with Turkey taking its place amongst these countries.”

Dean of one of the world's top universities Yale's School of Management, Edward Snyder raved the Turkish economy's successful performance during a presentation at a panel entitled "Key Nations in Global Economy" held at Sabancı Center and organized by the Foreign Economic Relations Board (DEİK).

Dean Snyder states that Turkey has long-reached the league of BRIC (Brazil, Russia, India and China) nations and says, "There needs to be work done on expanding the BRIC terminology. Turkey needs to be included," states Snyder.

Edward Snyder emphasized that Turkey, with its rapidly growing economy and positive demographic characteristics will play a significant role in global transformation. Stating that in the next ten years Turkey will be in a whole new position, Snyder said, "I believe that in ten years' time this nation's economy will be amongst the world's largest ten. In the upcoming years, Turkey will display its economic leadership qualities. Thirty years ago, the United States, Europe and Japan dominated the global economy. However, this is now changing. The world is becoming increasingly flat."

Drawing attention to the fact that is incredibly important from a nation standpoint, Synder stated, "Turkey is not just an important country, it is a very important country. Turkey has become one of the world's pivotal players. I believe that Turkey has reached the level of BRIC nations. This definition however has become outdated and needs to be updated immediately",

Pointing out that Turkey's economy has the dynamics of BRIC economies, Snyder says, "in my opinion, expanding the BRIC terminology is something that needs to be worked on."