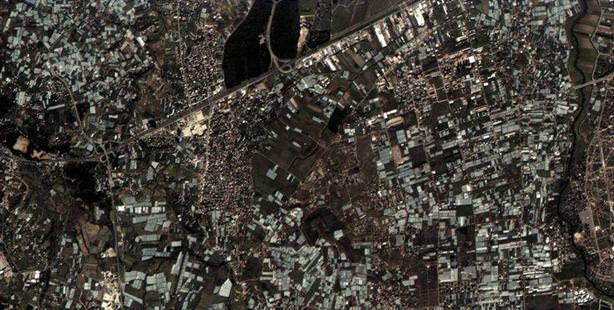 Turkey has begun to receive data from the national reconnaissance satellite Göktürk 2, which was launched on December 18th.

Minister of Science, Industry and Technology Nihat Ergün recently announced that they began receiving initial imagery from the satellite ten days ago. "The first images to come in of Turkey were of Antalya and internationally were of Auckland, New Zealand." Ergün also announced that the satellite passes over Turkey four times a day during which it is able to capture imagery in every point throughout Turkey.
Ergün says that through connecting and directing the satellite as it passes over Turkey, they are able to acquire imagery from various locations in Turkey. Explaining that the satellite has a 2.5 meter resolution, Ergün says that this allows the possibility to clearly focus on a 2.5 meter-sized object.

According to Ergün, the Air Forces Command will primarily benefit from the imagery obtained by the observation satellite and will have the capabilities of acquiring and processing the imagery on their own land station.

Explaining that Turkey has now gained competence in building satellites, Ergün states that all programming used by the Göktürk-2 was developed domestically while 80 percent of the equipment used for the satellite also came from Turkey.

According to the Minister of Science and Technology, Turkey is also working on producing a team of satellites in which five to six satellites will operate in coordination ensuring that at any given time, one to two satellites are positioned over Turkey.

"These satellites will work as teams. They will allow for constant imagery of Turkey in areas designated. This is what our friends will be working on now," states Ergün, pointing out that Turkey aims to be one of the world's 12 countries to have the capabilities to produce and launch their own satellite. "If you have no presence in space, then you cannot be strong on earth. In other words, the amount of power you have in space makes your potential on earth that much more powerful," stated Ergün.