Turkey receives a positive sign from the EU on chapter openings 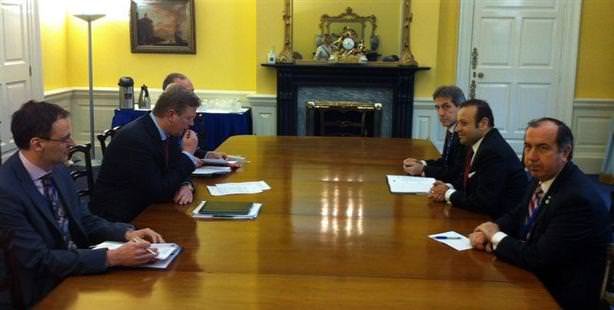 Turkey received a positive signal that there may be new chapter headings opened with the EU during an informal meeting of EU ministers in Dublin, the capital of the current EU term presidency Ireland.

EU Commissioner for Enlargement Stefan Füle and Ireland's Minister of State for European Affairs Lucinda Creighton held a press conference after the meeting, which marked the first EU meeting attended by Turkey's Minister of EU Affairs and chief negotiator Egemen Bağış since before the six-month term presidency went to Greek Cyprus.

Responding to questions from the press regarding Turkey's EU negotiation process, Creighton responded from the Dublin Castle to say that although it is important the European economy get back on track, irrespective of the "sole market" concept which makes Europe what it is, there are a set of values and legacies that must also be shared.

Pointing out that Europe is an alliance of nations which have different traditions and unique characteristics, Creighton stated, "We may need to revive this understanding. Therefore, we will be executing a cultural program throughout Europe during our EU term presidency."

Emphasizing that EU-Turkey relations are extremely vital for a number of reasons, Creighton went on to state, "Of course, this is a long road. However, it is to our benefit that Turkey continues the reform process and brings European values to their agenda. Turkey shared this determination during our meeting of EU ministers. Pointing out that there are certain issues and obstacles when it comes to relations with Turkey, Creighton said that she hopes to make progress with Turkey in accession talks during Ireland's term presidency.

"THE REFORM PROCESS IN TURKEY IS A SOUND BASIS"

EU Commissioner for Enlargement Stefan Füle expressed that he shared Creighton's sentiments and reminded that during the last five EU term presidencies there have been no new chapter headings opened with Turkey.

Füle said that the meeting held yesterday showed that member states are also in favor of Turkey's membership talks going back on track. Füle also said that Turkey's reform process establishes a strong basis for the opening of new chapters and also mobilizes membership negotiations. Füle also said that the opening of chapter headings such as number 23 regarding basic rights was not only in the best interest for Turkey but was also important for the EU.