Anatolian cities on the fast track to modernization 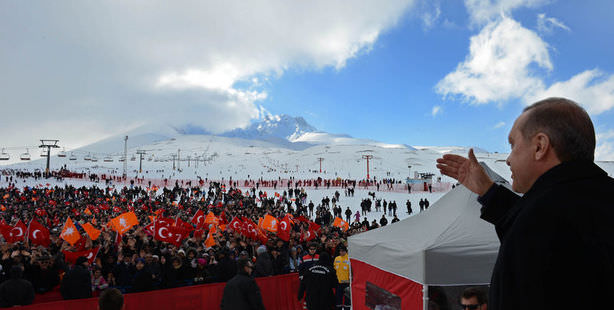 Prime Minister Tayyip Erdoğan attended an opening ceremony for 41 different investment projects totaling a whipping 123 million liras in Kayseri on Sunday. During his address, Erdoğan pointed out Kayseri as being an exemplary province of progress in Anatolia.

Over the weekend, Prime Minister Tayyip Erdoğan participated in a combined opening ceremony for 41 new facilities in Kayseri. The investments, totaling up to 123 million liras, also include a skiing center in Erciyes. Delivering an address at the ceremony held at a 2,500 elevation peak in Kayseri, Prime Minister Erdoğan referred to Kayseri as an exemplary province. "Whatever we do in Kayseri is still not enough. That is because Kayseri sets a precedent for the entire country with its success, hard work and dynamism."

"We are here today for a unique gathering set on the snowy slopes of Erciyes and heated by the warmth in your hearts," said Erdoğan to the crowds that came out to watch the Prime Minister officially launch a series of 41 facilities at a combined investment of 123 million liras. Erdoğan also congratulated and expressed his gratitude to the Kayseri municipality, the mayor and his team for the realization of such important investments.

During his address, Prime Minister Erdoğan also stated; "We are launching a six-part mechanic facility as well as putting an escalator into operation. In addition, we will be opening an artificial snow producing facility. Today's launches also include two ski runs as well as a number of other facilities including a man-made lake and a mountain access road."