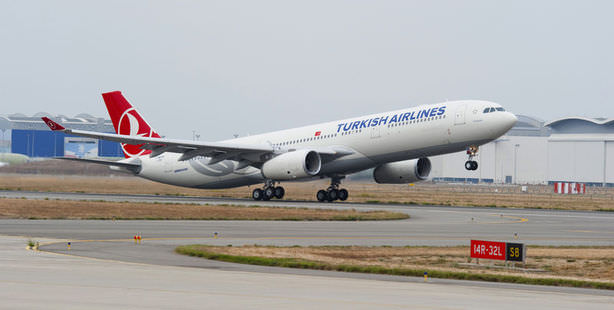 Turkish Airlines General Manager Temel Kotil says they are well on their way to becoming world leaders in passenger numbers as the global center veers towards the east.

Temel Kotil, the General Manager for Turkish Airlines (THY) says that Turkey's extremely strategic geography creates significant advantages for air transportation, especially when it comes to bringing down the costs on transit flights. Kotil explains the secret to the airline's success as being providing service that goes way beyond the passengers' expectations, making them feel more like guests in their own homes rather than travelers in a plane cabin.

Speaking as a special guest at a summit organized by the Russian-Turkish Businessmen's Association and held at the Lotte hotel in Moscow; THY General Manager Kotil relayed his story of success to Turkish and Russian businessmen. Kotil says that Turkish Airlines aims to increase the daily capacity of 1,000 flights up to 2,000, which is a critical number. "The axis is veering east. We now conduct eight flights to Saudi Arabia and we are the leading airline in the Middle East and Africa. We fly just as many passengers to Europe as do European airlines. We want to maintain our high quality standards. Our younger staff contributes just as much to our success as do our experienced directors," said Kotil.

THY IS ITS OWN COMPETITOR

Kotil goes on to explain that in order to ensure they remain consistently at the top, they have adopted a principle based on the concepts, 'zero laziness' and 'zero bad intentions.' "For one passenger to be disappointed to us is the same as 46 million of our passengers feeling the same way. We pay a lot of attention to customer complaints and are trying to bring them down to a minimum. We are becoming more corporate each day. All of our employees contribute to furthering this company. Turkish Airlines is a firm whose employees act as if they were managers. It is own competitor, because it is the only one that can hold itself accountable," said Kotil.

IF YOU PAY THE COST, WE CAN SEND IT TO THE MOON

Kotil explains that 3.5 billion people fly all over the world, of which THY is responsible for transporting 46 million. That, says Kotil, accounts for four percent of the entire's world's air transportation.
According to the THY General Manager, the airline is also capable of delivering cargo to every single location in the world. "If you pay the cost, we can send it to the moon," jokes Kotil. Turkish Airlines has grown exponentially over the past ten years explains Kotil, with their previous 12,000 employees rising to 30,000 and their number of pilots jumping from 640 to 2,500.

WE ADD OUR OWN VALUE TO PROFESSIONALISM

Kotil goes on to explain that up until 2003, THY used to offer tickets at a predetermined price by Ankara, which was a structure that worked against promoting competitiveness. "Now, we have to work hard to impress our customers. Turkey has no idea of the value of the nation's resources. We have just now begun to take on what other developed nations do. In addition, we include what comes from us naturally, and that is what leaves a lasting impression," states Kotil.

The Turkish Airlines General Manager brought up the example of a hostess who offered coffee she was carrying in her purse, when a passenger requested a Turkish coffee as well as another example of cabin staff accompanying a passenger who fell ill during the flight all the way to the hospital.

THE AIRLINE THAT FLIES TO THE MOST COUNTRIES IN THE WORLD

Once Turkey's airline industry was opened up to competitive rates, THY began focusing internationally, bringing its 12 million passenger capacity in 2000 all the way up to 38.5 million in 2012. The airline's end of year goal for 2013 is 46 million. THY, which secured significant demand for transit flights, saw a rise in revenue from 1.5 billion dollars in 2000 to eight billion dollars by the end of 2012. The end of year target for 2013 is 9.7 billion dollars.

THY TARGETTING TEN FLIGHTS TO MOSCOWS

Responding to questions from members of the press, Kotil stated, "Turkish businessmen are quite influential in Russia and Russians have made significant investments in Turkey, especially in the Mediterranean region. We transport Turks to Moscow as well as seven other destinations and we bring Russians to Turkey. We have an excellent team in Russia and want to be making at least ten flights a day to Moscow," said Kotil.

Kotil explained that from Turkey's standpoint, Russia is an extremely productive geography and its success is not only due to their individual and corporate efforts but also comes as a result of the contribution of both nations' political leaders. "I arrived in Russia on a Turkish passport without obtaining a visa. A fellow German passenger was not allowed to enter. Turkey and Russia are increasing mutual economic activities and we are making our contribution and transporting passengers. Through Istanbul, we are also connecting Russia to the rest of the world. This brings in even more passengers," said Kotil. The THY General Manager also noted that air travel has a multiplying effect on the economy. And that if one unit of revenue is brought in through transportation, thise means its indirect contribution to the economy is equivalent to seven units.

A NEW AIRPORT WOULD MAKE TURKEY A WORLD LEADER

Kotil also relayed information regarding the third airport planned for Istanbul. "A tender is currently being held for the third airport, which will have five airfields and a 150 million passenger capacity. There is no airport of that scale in Europe. It will be the third biggest in the world. What Turkey is trying to say with this airport is that they are the world's number one. This airport will bring in 30 million tourists to Istanbul. Last year, we had 13 million tourists arrive to Istanbul. This airport is going to allow us to fly to even further destinations. We won't have any restrictions when it comes to airports. We are the world's rising stars in aviation; however now when it comes to airports, Turkey will also be a star," stated Kotil.