Libya's PM vows to pay off debts to Turkish firms 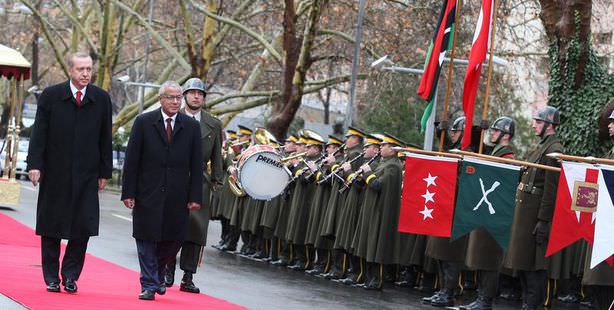 Prime Minister Erdoğan hosted his Libyan Prime Minister Ali Zeidan in Ankara. During a joint meeting, a compromise was reached regarding Libya paying back the debt the nation owes to Turkish firms that were forced to suspend operations in Libya when the civil war erupted.

Prime Minister Tayyip Erdoğan hosted his Libyan counterpart Ali Zeidan for an official visit at the Prime Ministry in Ankara on Wednesday. During a one-on-one meeting, the two discussed the Arab Spring, the situation in Syria and Libya's construction debt owed to Turkish firms.

During his stay, Libyan Prime Minister Ali Zeidan also met with President Abdullah Gül and Deputy Prime Minister Ali Babacan. At a dinner held last night, Zeidan had the opportunity to meet with Economy Minister Zafer Çağlayan who assured that Libya was ready to pay off 50 percent of their debt to Turkish firms immediately.

ZEIDAN: "WE WILL BE MAKING PAYMENTS IN THREE INSTALLMENTS"

Speaking at a joint press conference with Libya's visiting Prime Minister Ali Zeidan, Prime Minister Erdoğan said that the two had discussed the outstanding debts and compensation payments owed to the high number of Turkish firms that were forced to halt operations and even evacuate the nation during the uprising. "We have expressed that our greatest wish would be for our contractor firms whose work was left unfinished to be able to return to Libya to complete the projects they were working on as soon as possible," said Erdoğan. Zeidan responded by stating that they were ready to pay 50 percent of the outstanding debt owed to Turkish firms upfront and would pay the remaining half in two 25 percent installments.