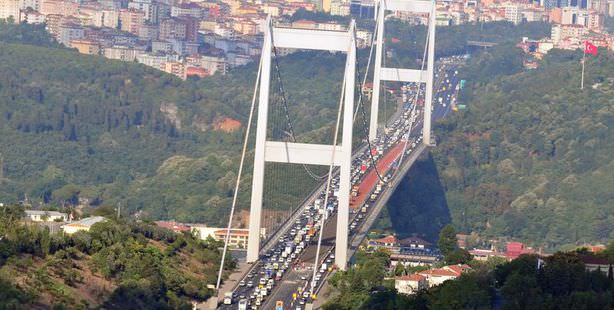 A $5.7 billion highway and bridges privatization tender has been cancelled following remarks by Prime Minister Erdoğan a month ago which signaled the deal could be revisited. At $5.7 billion dollars, the Koç-Ülker and UEM consortium had submitted the highest bid in the tender.

Finance Minister Mehmet Şimşek announced on Friday that the Supreme Privatization Board (ÖYK) has cancelled a $5.7 billion tender, which would have given the winning consortium of Koç Holding, Ülker Group's Gözde Girişim and Malaysia's UEM Group the operating rights for the 2,000 kilometer Edirne-Istanbul-Ankara highway as well as for Istanbul's two bridges for the next 25 years.

While participating in a television program last month, Prime Minister Recep Tayyip Erdoğan had suggested that a number of mega privatization tenders such as the highway-bridges and Başkentgaz tenders may be cancelled.

At the time, Erdoğan had stated, "Our colleagues are now headed to the Gulf where they will be holding a series of one-on-one meetings. I believe that serious funds may soon be entering the country. We may have to cancel certain privatizations. For example, we may have to renegotiate the highway and bridge tenders, because we have higher expectations. When it comes to profitability, we need to act in favor of our nation," said Erdoğan.

The Turkish-Malaysian consortium of Koç-UEM-Gözde, offered the highest bid at $5.7 billion during the December 2012, tender for the 25-year operation rights to the city's toll highways and two suspension bridges in Istanbul.

TOLL ROAD PRIVATIZATION MAY BE DIVIDED INTO SEPARATE PACKAGES

The Supreme Privatization Board is expected to announce their new strategy in the days to come. The board is currently considering two main options, one being to postpone a new tender and the second which would be to divide the privatization of highways and bridges into separate packages.