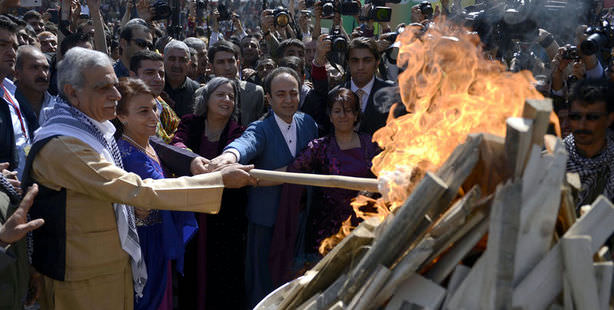 The announcement by PKK leader Öcalan calling for weapons to be silenced has created a buzz in the Turkish business world. Spanning from the east to the west, the nation’s business people have responded with messages of unity. These individuals, who direct the country’s economy, say that Turkey will now be able to reach their target for 2023 five years earlier.

When the declaration of a ceasefire was released by the imprisoned PKK leader Abdullah Öcalan in a written statement read aloud during celebrations held in Diyarbakir for Nevruz on Thursday, the success of the ongoing process initiated by the government was solidified, resulting in an increased sense of hope that an end to terrorism in Turkey may be approaching. The fire that was lit at Nevruz not only signified a new era in politics but also a new era for the nation's economic development. Turkey's business world, which has been closely following the developments of the peace initiative from the start, agree that finally reaching a solution to the issue would allow Turkey's economy to thrive.

Turkey will change in ten years

"Everyone in Turkey now wants peace. We all bear a great responsibility throughout this process, especially the business world. When the weapons are silenced, business people should also begin doing what befalls them. I believe that with an end to terrorism, we will see an entirely different Turkey in ten years. When Turkey has completed this process, the nation will advance a level in terms of the economy."

We will be going to invest

"Terrorism was Turkey's bleeding wound. A peaceful and long-term solution will pave the way for Turkey. It will contribute to Turkey's growth and development. When terrorism comes to an end we will be going there to invest."

We will make leaps

"With this ongoing development, Turkey will make even further leaps and bounds. The Southeastern Anatolian Region is quite untouched and has a great growth potential. We no longer need weapons. Once this issue has been solved investments will begin to pour into this region."

Residential projects will be on the rise

"Up until now we have always made residential investments in Istanbul. Due to terrorism, the East and Southeast regions have been neglected. There are a lot of areas where investments have not been made. If terrorism comes to an end, I am thinking of starting a residential project in Diyarbakır."

Turkey will be a star in five years

"Turkey's future will change. Turkey's economy in its entirety and not just in the East will be positively affected by this. Development will increase in every area from tourism to mining, as well as with exports. This situation will also solve the current deficit issue. This is because; this means the entry of new resources into the economy. When you add all of this together, within five years Turkey's economic outlook will have changed. Our star will shine even brighter in the region."

Business people originated from the East are anticipated to take the first step for investing, with the agriculture, tourism and energy sectors as their targets. With the increase of hopes for a solution following yesterday's call for a ceasefire, announcements of investment plans for the region have already begun to surface. Projects shelved due to terrorism, will now have a chance to be realized one by one. Business people from the region are expected to jump first to invest. The region, which has remained relatively untouched, will now begin to thrive in a variety of sectors spanning from energy, tourism to mining. Diyarbakır is expected to be the province that will be in most demand for investing.

"With this peace process, the future of Diyarbakır and the region will be bright. We are expecting investments to increase after this process is over."

We will surpass two million

"Business people used to come here to eat kebabs. Now, they will be coming to invest. Parallel to the developments in the economy, in five years' time, Diyarbakır's population will surpass two million."

We will gain five years

"Peace is extremely important for us. Turkey will be able to make its 2023 target by 2018. The real race in the region will come after peace is secured. You can also feel the interest by foreigners."

"These announcements of peace have given us hope. The region has a great potential for investment. The incentives are extremely appealing. Energy investments will especially thrive. I personally plan on increasing my energy investments in the region."

Van will become a tourism center

"The developments give us hope. This situation would change all of Turkey. Now, there will be reverse migration. We have a project to establish Van as a center for tourism for the Middle East and Central Asia. We had postponed it, but now we will begin to expedite the project."

There could even be a new pipeline

"Because the peace process will put an end to all security issues, trade between Northern Iraq and Turkey will increase. A new pipeline could also easily be built for the transportation of natural gas resources in Northern Iraq to Europe."

This is a translation of an article originally written by Yasemin Salih and İbrahim Acar.