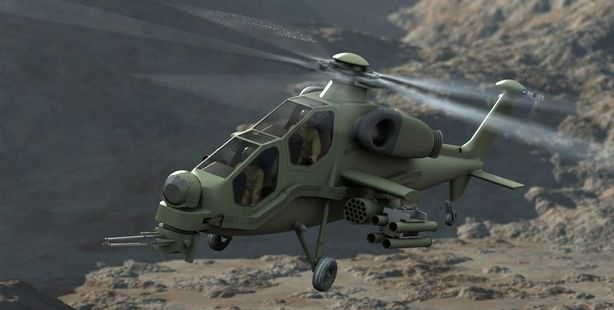 The T-129 ATAK, Turkey's first national attack helicopter, will soon be included in the Turkish Armed Forces. The Undersecretariat for Defense Industries 2013 Performance Program includes a number of major national developments including setting up test fields in Aksaray and Sinop for its missile system projects.

Turkey's defense industry will be determinedly continuing to strive for the success seen in recent years through embarking on a number of major national projects such as producing a national attack helicopter, a national tank, a national plane, a national satellite as well as a national vessel.

The Undersecretariat for Defense (SSM) has prepared a performance program to act as a road map for the projects to fruition in 2013 and for the advancement of the defense industry sector.

According to information assessed from the SSM's 2013 Performance Program, while the trend of increased global defense spending since the 2000's persists, Turkey's defense industry has now reached the 13 to 15 billion dollar mark. Parallel to the advancement in Turkey's defense industry is the inclusion of an extensive number of domestic products in the Turkish Armed Forces (TAF) inventory.

In 2013, the qualification process of the T-129 ATAK, Turkey's first national attack helicopter equipped with avionic and weapon systems designed and produced in Turkey, will be completed. Four EDH (Early Delivery Helicopters) helicopters as well as the P5 helicopter, produced with ATAK configuration and three T-129 ATAK helicopters will be entering the Turkish Armed Forces.

For the defense industry's missile system projects, the SSM is also planning on setting up testing fields in Aksaray and Sinop.