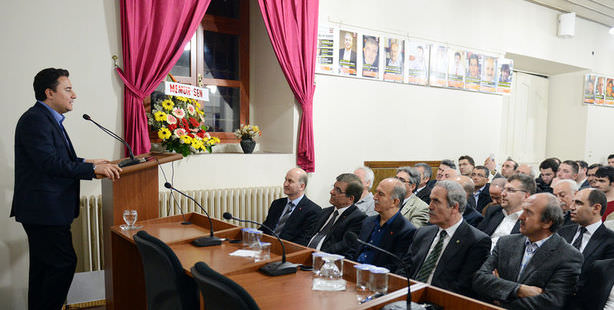 Considered to be Turkey’s Davos, the Uludağ Economic Summit kicked off in Bursa on Friday. Addressing the two-day summit, Deputy Prime Minister Babacan said, "Turkey has become a donor nation by giving grants of up to 1.3 billion dollars to a number of countries.”

The Uludağ Economic Summit, which is considered to be Turkey's version of the Davos Summit, is being held in Bursa for the second year in a row. Under the main theme of "Turkey's Window of New Opportunities", the summit, which comes to a close on Saturday, hosted a number of prestigious speakers from the worlds of politics and business.

During the summit, Deputy Prime Minister Ali Babacan announced that by offering grants of up to 1.3 billion dollars to a number of countries last year, Turkey has become a donor nation. Babacan also announced that Turkey's 2012 growth rate, which will be released on Monday, is over two percent. Babacan also commented on Standard&Poor's recent upgrade of Turkey's rating by saying that in order for Turkey to issue Eurobonds they need to be rated by at least two credit rating institutions. "If this legal requirement did not exist, Turkey may not have worked with any international credit rating institution," stated Babacan.

THE 25-YEAR TERM MAY BE SHORTENED

Babacan also said that if bridges and highways are made public, then they will have to reassess what the revenue would be and may even shorten the 25-year operation term.

Our 2023 target is extremely realistic

During an address at the Uludağ Economic Summit, Çalık Holding Executive Board Chairman Ahmet Çalık offered an evaluation of 'The New Turkey's New Opportunities'. "We have the best entrepreneurs, managers and scientists that are capable of making best innovations and advancements in the world. From this perspective, Turkey's 2023 target is extremely realistic. I have full belief in Turkey's objective to become one of the world's top ten economies," said Çalık.

Drawing attention to the significant changes that have transpired in the nation from 2002 to 2013, Çalık said, "When countries are not managed well, then just like the case of companies, the public can experience great harm such as becoming poor. Therefore, it is crucial that nations are run by good politicians. If they stonewall you, then as the private sector no matter how entrepreneurial you may be, it is impossible to open the floodgates. In this respect, the past ten years have been extremely successful for Turkey."

'I began working in a truck'

Coca-Cola Chairman and Chief Executive Officer Muhtar Kent delivered a talk entitled 'My Story' in which he told the story of how his 35-year-old career first began, how it developed and how he came to where he is now. "I began my career in 1979 at Atlanta Coca-Cola in a sales truck. I spent ten months doing that. I would get up at four in the morning and would sell products to markets. I found the job through a newspaper advertisement. When I went to the United States in 1978, all I had in my pocket was a diploma from a British university and my birth certificate stating I was born in the U.S. I noticed that in people's lives not everyone's career was always on the rise. The line of success is never directly vertical like a pole. There will be ups and downs, and the downs need to be managed well."

'We need to create a climate of innovation'

Eczacıbaşı Holding Executive Board Chairman Bülent Eczacıbaşı also addressed summit participants by stating, "Turkey needs to create a climate of innovation. It is possible to create this climate through political determination and embracing the private sector. There is no reason we cannot succeed in achieving this." Eczacıbaşı went on to state that although the environment of innovation has not sufficiently matured in Turkey, there is both intense interest and excitement.

Turkey's Industrialists and Businessmen Association Chairman Muharrem Yılmaz also addressed the summit's participants and expressed his belief that the recent upgrade of Turkey's rating will increase both interest in Turkey as well as investments.

This is a translation of an article originally written by Gül Kireklo and Tuna Çam.