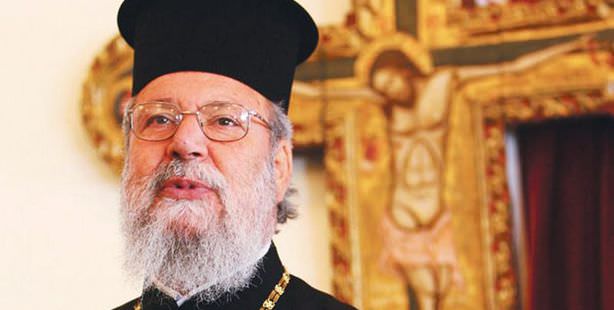 Archbishop of Greek Cyprus Chrysostomos II recently accused the Troika of the island’s woes and stated, “There will be no European Union in the future. Cyprus should exit before the union collapses.”

The spiritual leader of Greek Cyprus Archbishop Chrysostomos II recently stated that the European Union may not exist in the future and that his nation needs to exit the union. Releasing comments on a Russian news broadcast, Chrysostomos stated, "The economies of Spain, Portugal and Italy are still in danger. If the Italian economy collapses like ours as, the European Union will no longer remain."

Calling on Greek Cyprus to withdraw from the European Union, the spiritual leader of Cyprus' Orthodox church went on to state, "People do not understand the decisions made by the Troika," which consists of the trifecta of the EU, European Central Bank and the International Monetary Fund. "A majority of these decisions display a stance that will lead to the collapse of the union," said Chrysostomos, urging the necessity of Greek Cyprus leaving the EU.

Archbishop Chrysostomos II also recently announced that he has received threats from the Troika for him to withdraw his appeal to the Supreme Court against their decision to write off shares held in the Bank of Cyprus.

Russian nationals who have money in Greek Cyprus' banks have received bad news from their homeland. The Russian government will not aid businesses that have lost money in Cyprus, First Deputy Prime Minister Igor Shuvalov said, underscoring Moscow's resolve to clamp down on the flight of capital to offshore financial centers.

Meanwhile, soon to be liquefied on the Greek part of the island as part of a 10 billion euro bailout deal,
the Laiki Bank has announced that branches in the UK, Russia, Ukraine, Serbia and Romania will be sold.

Turkish Republic of Northern Cyprus Economy and Energy Minister Sunat Atun recently stated that Southern Cyprus' departure from the Euro Zone and entry into the TL Zone could result in increasing the competitiveness of the Greek part of the island's economy. Minister Atun says that it may not be possible to continue to administer the single monetary policy for Euro Zone nations.