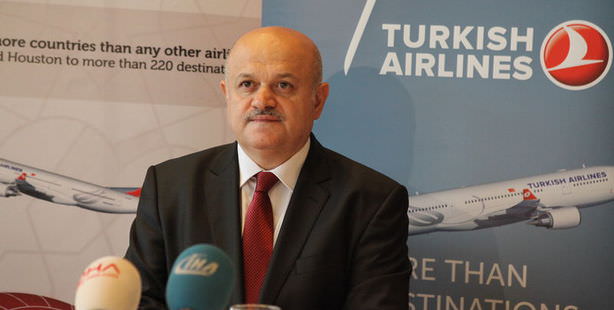 Hamdi Topçu, the Chairman of Turkish Airlines, which has come to the forefront of the aviation sector by making record aircraft orders as its rivals are grappling with the crisis, says, “The 278 planes we have ordered have a market-value of $38 billion however, we were given a discount.”

By increasing passenger capacity, profit, employment as well as its fleet Turkish Airlines (THY) is fast surpassing rivaling international aviation companies that are grappling with the crisis.

We had the opportunity to meet with Turkish Airlines Executive Board Chairman Hamdi Topçu to discuss a variety of topics including new plane orders, THY Technic and establishing new routes.

* What is the current number of planes in THY's fleet?

"THY used to have a fleet of 52 planes, however right now that number has reached 213. In 2020, we will have a fleet of between 350-400 planes. We are currently awaiting the delivery of 278 planes. Turkey's economic and political stability and the steps being taken to establish the nation as a global leader empowers us. We are riding on this wave and have adapted ourselves to the 2023 vision."

NO ROUTE HAS BROUGHT IN A LOSS; WE WILL BE FLYING TO 110 NATIONS

* How much did you pay out for the 278 planes you ordered from Boeing and Airbus?

"The list value of the planes we have ordered is approximately 38 billion dollars. We were given a discount; however I can't reveal what we actually paid."

* How were you able to finance the planes?

"There hasn't been a single state guarantee on any of the panes we have purchased in the past ten years. The purchases are conducted entirely through credit issued based on THY's assets and equities. We do not have an issue when it comes to financing. We are able to do so with the US and Europe Eximbank."

* Have you incurred losses on any routes?

"We have not shut down a single route we have opened in the past ten years. In the recent period, we have begun flying on 34 new routes and they are all at around 78 percent full capacity. Our most recent destination was Houston, which reached a 93 percent full capacity in the first week. By the sixth month of the year it will probably be impossible to find a seat. As of today, we fly to 221 destinations from Europe. We are first in the world when it comes to the number of countries served and we are in fourth spot in terms of cities. By the end of the sixth month, there will no longer be a single nation in Europe that we do not serve, Right now we fly to 99 different countries and we will be bringing that number up to 110 by the end of the year."

NEW SPONSORSHIPS IN FOOTBALL AND GOLF

* Will you be taking on any new sponsorships?

"We have decided to extend our sponsorships with Barcelona and Manchester. We will also be taking on new sponsorships in both football and golf."

* How many pilots do you hire a day?

"We need 600 pilots a year. We want to be able to accommodate for a part of this ourselves through the schools and universities we have opened up. We have nearly 300 foreign pilots currently employed."

WE COULD ENTER INTO THIRD COUNTRIES

"As THY Technic, we may set up maintenance facilities in third-party countries. There are a number of nations with which we are holding deliberations. We will be exporting our know-how. THY Technic wants to open up to the world."

* Are deliberations still ongoing with Lufthansa?

"We have not yet embarked on joint negotiations with Lufthansa. We are working on the issue amongst ourselves. However in the future we may move forward on a win-win basis."