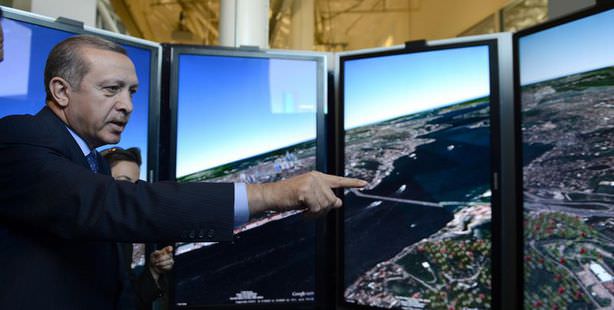 While touring Silicon Valley on his U.S. trip, Prime Minister Erdoğan had the opportunity to inspect the programs prepared for Turkey’s Fatih Project by Microsoft, where he revealed plans to launch a project similar to Silicon Valley in Istanbul.

While on his U.S. tour, Prime Minister Recep Tayyip Erdoğan paid a special visit to San Francisco's Silicon Valley, the headquarters for the world's largest informatics firms. Erdoğan had the opportunity to inspect the educational informatics systems prepared by Microsoft for the Turkish National Education Ministry's Fatih Project. While there, Erdoğan was briefed in the Apple tablet technology, he took a ride in a self-driving car and got to try on Google Glass, the latest technology smart glasses.

Prime Minister Erdoğan's first stop in Silicon Valley was to Microsoft where he was received by CEO Steve Ballmer, who donned a tie the premier had gifted him when he paid a visit to Istanbul a few months back. Ballmer, who is directing Microsoft's involvement in the National Education Ministry's FATIH project, which aims to equalize opportunities in education and improve technology in schools, briefed Erdoğan on the project.

Reminding that next week they plan to hold the tender for the Fatih Project, Erdoğan stated, "The Fatih project involves the production 10,600,000 tablets. We wanted to visit Silicon Valley before the tender in order to see what is going on in informatics technology and what the new advancements are in the location they are being developed. This is all because we also have objectives to realize a similar project to Silicon Valley in Istanbul."

VALLEY TO BE BUILT IN MUALLİMKÖY

Prime Minister Erdoğan announced from Silicon Valley that they have plans to establish a similar 'Informatics Valley' in Gebze's Muallimköy. A five million square meter area will be allocated to information technology firms that will be subject to special incentives. A speed train as well as an urban train line will access the region, which instead of having high-rises; will be constructed with a number of lower level buildings which will include areas designated for offices and research and development.

Prime Minister Erdoğan also had the opportunity to see his hometown of Güneysu and Istanbul on Google maps as well as tested out Google's new smart glasses design 'Google Glass'. Commenting on the experience, Erdoğan stated, "You are able to record footage like a video camera. The staff here is making strides, which means that we need to work harder to develop and advance our own knowledge. I see information as being a universal tool for humanity. We will all benefit from this together. We will embark on the future stronger and together. By visiting Silicon Valley and through the briefings we were presented with, we have been given the opportunity to increase our experience and knowledge. Microsoft, Apple and Google are constantly working on developing informatics."

A TEST DRIVE OF THE 'SELF DRIVING CAR'

Google was Erdoğan's last stop on his four-hour tour of Silicon Valley. Erdoğan was joined by his daughter Sümeyye Erdoğan on a test drive of the new "self driving car" developed by Google. Erdoğan described the car, which through a roof camera and an interior computer system is able to drive without a driver, by stating, "The vehicle operates with a system similar to the autopilot systems in aircrafts. These are just the first steps; they will be further developing their test drives."