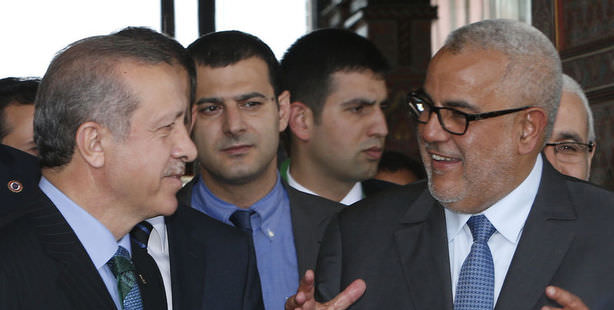 During the past five days there has been a polemic concerning the boycott of the Moroccan Business Confederation (CGEM) of a meeting between Turkish and Moroccan businessmen which took place during Erdoğan’s trip to Morocco on June 3rd. While the decision had nothing to do with the on-going protests in Istanbul and other cities, the real reason is proving to be an internal conflict between the CGEM and the Moroccan government.

"Do you think an angry rabbit can harm a Mountain?" Was a comment made by a Turkish businessman on the absence of the CGEM (Confédération générale des entreprises du Maroc) at a meeting between 300 Turkish and the Moroccan businessmen held in a hotel in the capital Rabat on Monday June 3rd.

"It is Morocco that needs to learn from the Turkish experience and not the other way around," added the elegant businessman who speaks fluent Arabic. He said that CGEM is not a unique player in the Moroccan economy, and therefore their absence would not affect the meeting. As for the reason provided by CGEM in regards to their absence that the invitation was received three days prior to the meeting which did not allow sufficient time to prepare for it, this Turkish businessman said that it was simply an excuse to set up further obstacles for the Moroccan government, adding "We know what's going on in Morocco". CGEM also said that the trade deficit in benefit of the Turks has been excessively stronger since the free trade agreement was signed in 2006. Moroccan imports from Turkey are estimated to be 320 million dollars. While Moroccan exports to Turkey are no more than 91.1 million dollars. As for the meeting, which took place during Prime Minister Recep Tayyip Erdoğan's stay, the Moroccan government provided an announcement three days prior, which is both common and possible in any trading or economical forum and show around the world that CGEM would attend.

According to the CGEM, the huge deficit of 220 million dollars has to be considered carefully and as a result this level of important meeting should be planned in advance. CGEM stated that they were not pleased to be missing out on this important opportunity and said they hope to discuss and be involved in finding solutions to balance the deficit.

The Turks are involved in the construction of many infrastructures in Morocco including the tramway of Casablanca, providing electronics equipment and the BIM distribution. But the tweets of CGEM members' shows that is way beyond the deficit. Apparently Morocco's Party of Justice and Development (PJD) which is considered to be have struggled since rising to power almost two years ago has chosen a business association called "Amal enterprise", which seems to be an Islamist version of the CGEM, however with much less leverage. Mr. Othman Cherif Alami, the CEO of Atlas Voyage tweeted "la CGEM est out « au profit d' Amal enterprise, d'obédience islamiste, laïcité out, même en Turquie ». (CGEM is Out «for the benefit of Islamic Amal enterprise, secularism is out, even in Turkey».)

An Amal enterprise businessman commented on the CGEM act as irresponsible and said it was humiliating to be in a meeting that had more Turkish participants than Moroccans although it was held in Morocco with the participation of 132 companies, all members of the Musiad Association. The situation actually had nothing to do with the timing of the invitations; the invitations were received at the same time by everyone. The issue is a political one between the secular parties more oriented towards France and Europe, Morocco's top economical partners, and the government, which is following in the steps of the Turkish example (yet more international in their point of view).

Hayati Yazici, Minister of Customs and Trade of Turkey promised to adjust the deficit by collaborating in logistics and said that the import of Moroccan goods had increased in the past five months while Turkish exports to Moroccan decreased by 4%. In addition, Turkish companies working in Moroccan have invested $225 million and employ 6,000 Moroccans.

The King of Morocco Mohamed the 6th seemed to be absent also, while it had been confirmed by the AA (Anatolian Agency) by the Moroccan Minister of External Affairs that he would be receiving the Turkish PM. Yet, a polemic was born. In Morocco, people have been playing the strategy of emphasizing the failure of Morocco's Party of Justice and Development (PJD), which is considered to have struggled since coming to power almost two years ago. Some analyze the situation as a boycott of the King directed at Mr. Erdoğan for his avoidance of visiting Morocco during his Arab spring tour in 2011, having maybe considered the Moroccan political changes insufficient until the arrival of an Islamist ruling party. In Turkey, and at such an agitated time, the only reason the Turks perceived that the King of Morocco didn't meet with the Prime Minister, was a show of support for their cause.

* Mr. Essaydi is a London based Moroccan freelance writer. He is interested in politics, economy and art.