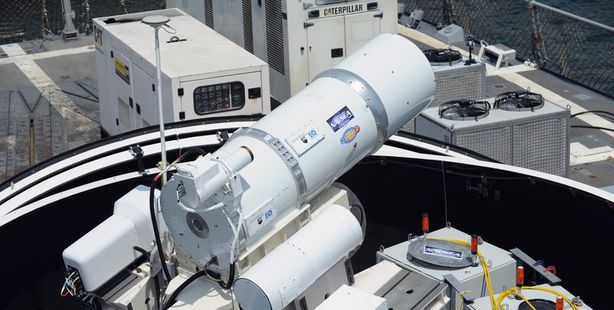 The Turkish Industry Ministry is joining forces with the Scientific and Technological Research Council of Turkey to manufacture a laser weapons system reminiscent of the directed-energy weapon developed by the United States Navy. Turkey’s target is to reach 100 percent indigenousness in the production of two types of laser weapons systems.

As Turkey continues to sign on to highly advanced and indigenous defense projects, the nation's defense industry will soon be adding laser weapons systems (LaWS) to their production inventory. At present, Russia, China, Israel and Germany are also working on developing the laser weapons system introduced by the United States Navy. Considered to be the weapons of the future, Turkey has already taken the initial stride to begin producing domestic LaWS.

Science, Industry and Technology Minister Nihat Ergün has also announced that the Ministry will be offering financial support to the high-budget project of developing a domestic laser weapons system similar to the U.S. system for Turkey.

FOUR NATIONS HAVE EMBARKED ON THE PROJECT

The Scientific and Technological Research Council of Turkey (TÜBİTAK), which has already produced a number of advanced technology products geared to increase the Turkish Armed Forces' striking power, is also taking a number of steps for the development of a domestic LaWS.

The release of the laser weapons system, used for ship-defense against drones or boat attacks by the United States Navy, was widely resonated. The Ministry of Industry will also be loosening their purse strings in order to support the indigenous development of the system, which is widely considered to be the weapon of the future. Minister Ergün has announced that the Ministry will be offering financial support for the high-budget project of developing laser weaponry which has already been initiated by TÜBİTAK's Defense and Security Technologies Research Support Group (SAVTAG).

Universities that operate on call with the Ministry of National Defense Research and Development and Technology Departments will be able to participate in the project as "Project Coordinators" along with private establishments and public R&D institutions. Minister Ergün has also stated that the laser source, which constitutes one of the most critical components of the weapons systems, will be developed entirely through domestic capabilities.