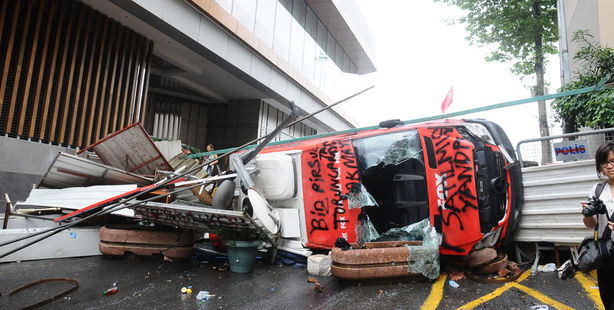 Istanbul Mayor Topbas: "The tradesmen and craftsmen suffered greatly, now all are concerned for the future.”

Speaking to the members of Istanbul Chambers of Tradesmen and Craftsmen Union at the Golden Horn Congress Center, Topbas said that continue to working on turning Taksim square into a park which can be fully enjoyed by visitors to the city.

"Most people thought we were aiming to build a new shopping mall. However, there is no such a plan. The work was for traffic regulation," said Topbas adding that the project for Gezi Park included a city museum and an art gallery.

Stressing the protests belonged to those who had no power in the elections, Topbas said, "We live in a country where there is no opposition party. The leader of Turkey's main opposition party still talks about the same issues that existed in the 1990s."

"There are around 5,000 tradesmen operating around Taksim Square where the protests took place. Out of 5,000 businesses, 1,242 have been damaged. Our loss alone is between 40-60 million liras," said Yilmaz.

Stating they were never involved in ill-advised protests, Yilmaz called on the demonstrators to put an end to the protests.