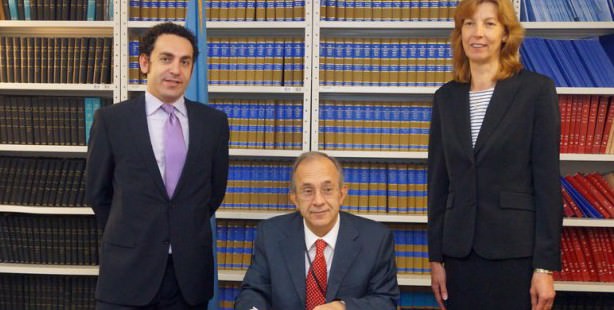 The Arms Trade Treaty, which was adopted at the UN General Assembly on April 2, 2013 following seven years of negotiations and opened to signature on June 3, 2013, was signed by Turkey on Tuesday.

Turkey became the 76th country to sign the United Nations (UN) Arms Trade Treaty (ATT) on Tuesday.
According to a statement on Wednesday by the Turkish Foreign Ministry, an important step was taken for "a universal and legally binding mechanism that sets common standards at the highest possible level to regulate the exports, imports and transfers of conventional arms."

The statement said, "Having actively contributed to the process and co-sponsored the resolution, Turkey has on numerous occasions voiced its intention to sign the Treaty at the soonest time possible. On July 2, 2013, Ambassador Halit Çevik, the Permanent Representative of Turkey to the United Nations, signed the Treaty on behalf of the Republic of Turkey. For a speedy entry into effect and an eventual universalization, we expect all states to sign the Treaty and complete their national ratification procedures as soon as possible."

Signing the UN Arms Trade Treaty on behalf of Turkey, permanent representative to the UN Halit Çevik stated that Turkey has made major contributions during the preparation process of the treaty. Çevik also stated that Turkey's standards in arms trade are "actually beyond the inserted provisions of this treaty." Cevik underlined the importance of "universal rules" in global arms trade, adding that all member countries should sign the treaty.

Countries which sign the treaty need to ratify it in their own parliaments and inform the UN. The Arms Trade Treaty was approved in April, 2013 with the support of 154 country's votes in a UN General Assembly. The treaty will come into effect 90 days after the ratification of the 50th signatory state.