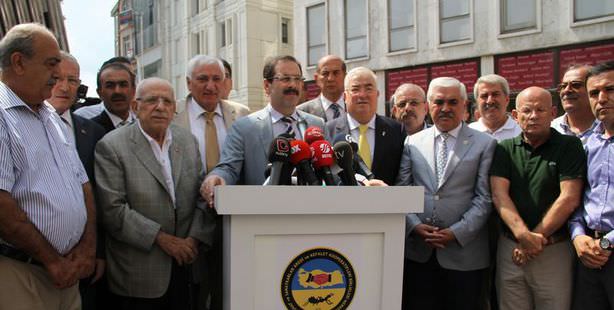 Merchants are now saying enough is enough to their victimization as a result of the Gezi Park protests. Merchant unions, that represent 1.5 million merchants, gathered in Galatasaray on Monday to demand peace on the streets.

With turnover down due to the Gezi Park protests, merchants are calling for "peace to prevail on the streets."Turkey's Merchants and Craftsmen Credit and Sponsorship Cooperative Unions Central Union (TESKOMB) have offered support to the merchants in Istanbul's Beyoğlu district which have been hit hard as a result of the demonstrations. On Monday, union members gathered in Galatasaray to say, "Peace needs to be restored to our streets and merchants not made to suffer any further. Enough is enough."

At the meeting, TESKOMB Chairman Kadir Akgül said, "Speaking on behalf of the one million, 500 thousand merchants and craftsmen, we want peace to be restored on our streets." Explaining that trade has been disrupted as a result of the protests in a number of cities throughout Turkey, Akgül noted that after the protests, both domestic and foreign tourists have stopped coming to Taksim altogether. "Our products are perishing on our shelves; our goods are waiting on hold. There are many that have been pulling down the shutters without making any sales for days. As a result, the demonstrations and the rampage have exhausted our patience."

NO CONSIDERATION FOR THE MERCHANTS

Ayşegül Yorgun hails from three-generations of flower vending in Beyoğlu. Explaining the suffering she has endured as a result of the Gezi Park protests, Yorgun said, "We come empty-handed and leave empty-handed. We are throwing the flowers away in the trash. Our debt to the auction house is building up. No one is thinking about the merchants."

TESKOMB Chairman Kadir Akgül addressed the reactions of merchants to the Gezi Park protests during his address at Galatasaray. "The road to peace and harmony is through economic growth. Merchants have supported this process through providing work and food. Unfortunately, we have become the true victims of these recent incidents. The squares belong to the entire nation, however, it is the merchants that give them life," said Akgül.