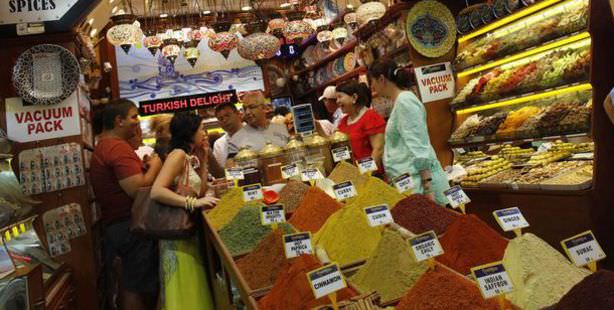 Turkey’s economy registered 4.4 percent growth in the second quarter of this year, placing them well in the league of giants. Domestic demand shouldered this quarter’s growth while exports underperformed.

Turkey's second quarter economic figures, released by the Turkish Statistical Institution on Tuesday, beat expectations by registering 4.4 percent growth. Turkey's economy has been logging growth for 15 consecutive quarters. Tuesday's figures are not only the highest quarterly growth rate Turkey has seen in a year-and-a-half, but they have also placed Turkey in the top third spot globally for economic growth. The growth rate for the first half of the year was at 3.7 percent. Second quarter figures have now brought the possibility that the economy may meet its four percent annual target to the agenda.

EXPORTS HAVE NEGATIVE EFFECT
Spearheaded by public and private sector consumption, second quarter figures were saved from experiencing the negative effects of the underperformance in exports, which was the highest contributor in 2012.

The main contributors to the second quarter's 4.4 growth was domestic consumption at 3.4 points, inventory variation at 2.3 points, state investment spending at 1.4 points and state final consumption expenditure at 0.8 percent. The growth rate was dragged down by 0.5 points by private investments and by three points from net exports.

The highest growth from a sector standpoint was recorded in tourism at 14.9 percent. The manufacturing industry expanded by 3.4 percent. Commerce grew by 5 and construction by 7.6 percent. Consumption expenditure rose by 5.3 percent and public investments by 36.7 percent. Meanwhile, private investments regressed by 2.0 percent. The national income reached 385.113 billion dollars on average.

Finance Minister Mehmet Şimşek: "We have experienced growth through the contribution of domestic demand. This trend we have embarked on despite all of the negative global factors is an undeniably important success. Growth figures will most likely remain under four percent this year."

Economy Minister Zafer Çağlayan: "We have logged growth consistently since the final quarter of 2009. In other words, there has been consecutive growth experienced for 15 quarters. We will realize higher growth than the 2.2 percent rate reached last year; however we will be seeing figures lower than our OVP target. As the Ministry of Economy, we are expecting growth to remain approximately at 3.5 percent.