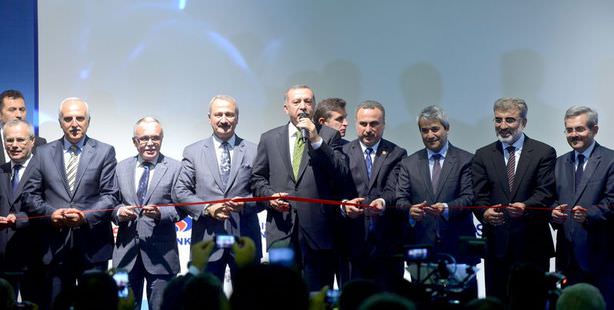 Comparing Turkey to a sleeping giant, Prime Minister Erdoğan stated, “The giant has awoken. Our economy is no longer fragile. Turkey will continue to grow with stability.”

Speaking at the TÜMEXPO on Thursday, Prime Minister Recep Tayyip Erdoğan announced that at 786 billion dollars, Turkey's national income in 2012 was record-breaking. "Turkey was a sleeping giant, however that giant has now awoken," said Erdoğan. Highlighting that they have committed rooted reforms in every arena over the past 11 years, Prime Minister Erdoğan stated, "With the rooted reforms we have realized, Turkey has acquired the strength through both our democracy and economy to face any obstacle and weather any storm."

"Our economy is no longer fragile. There may be small-scale tides or turbulence; however, our democracy will continue to advance through consistently progressing in the right direction while our economy will continue to grow with stability," stated Erdoğan. The Prime Minister also announced that the national income over the past year, in other words of the past four quarters combined, has reached 820 billion dollars, which he said was a historical record for Turkey. "Right now, looking back over the past four quarters, Turkey's national income in Turkish liras has reached 1.5 trillion. This is yet another record and on behalf of our country and nation is an encouraging development," said Erdoğan.

Prime Minister Erdoğan also touched on Turkey's second quarter economic growth figures by stating, "In the second quarter of 2013, Turkey logged a high rate of growth at 4.4 percent. With this rate we have not only surpassed expectations, but we have also become the world's second economy to record the highest growth in the second quarter."

On Thursday, Prime Minister Erdoğan also attended a promotional and signing ceremony for a City Hospitals Project. The project, which Erdoğan said had been a dream of his for 11 years, involves establishing 15 urban hospitals in 14 provinces to create an additional 24,405 bed capacity through a joint public and private sector collaboration. The hospitals, which will include general as well as branch hospitals will be set up in Adana, Ankara, Elazığ, Gaziantep, Istanbul, Kayseri, Mersin, Yozgat, İzmir, Konya, Manisa, Bursa, Kocaeli and Isparta.