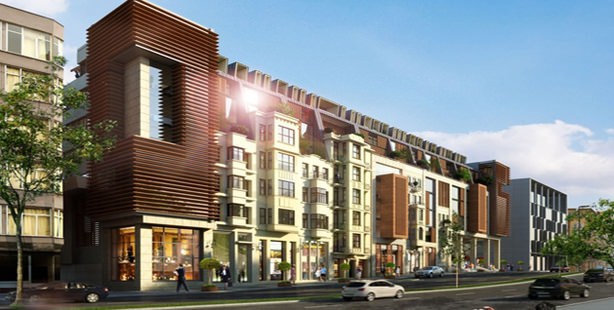 Tarlabaşı 360, a project developed in conjunction by the Beyoğlu Municipality and Çalık Real Estate, was named the best “Commercial Renovation/ Redevelopment Project in Europe” at the 2013 International Property Awards Ceremony held in London.

Tarlabaşı 360, an urban renewal project for Istanbul's historical neighborhood located near Taksim in Beyoğlu, embarked on by the Beyoğlu Municipality and Çalık Real Estate (Çalık Gayrimenkul) was awarded as the "Best Commercial Renovation/ Redevelopment Project in Europe" at the 2013 International Property Awards Ceremony held in London on Tuesday night. Representing the project at the awards ceremony in London was Beyoğlu Municipal Mayor Ahmet Misbah Demircan and Çalık Real Estate Executive Board Member Feyzullah Yetgin.

The project, which will be launched in November, was selected amongst six other prominent projects as the recipient of one of the most prestigious awards offered in the area of real estate in Europe. Demircan received the award by House of Lords member Lord Bates during the awards ceremony held at the Grosvenor House Hotel on the evening of September 24.

TARLABAŞI IS AN EXAMPLE OF GREAT COMPROMISE

Expressing how pleased they were that the Tarlabaşı Urban Renewal Project has gained such success, Beyoğlu Municipal Mayor Demircan, stated, "This project is not only Istanbul's first urban renewal project but is also a project of great compromise where all sides stand to share the gains in terms of the region's demographic and ethnographic structure. In this manner, the Tarlabaşı Urban Renewal project has become an example for all of Turkey. It is a great source of pride for us that this project, which was initiated in response to the demands of Tarlabaşı locals, has come all the way to England to be awarded as Europe's best urban renewal project."

Demircan went on to state that through the project they have managed to protect the historical architecture and create a new area of attraction, similar to projects embarked on by developed nations, and added that local residents will gain a significant increase in their property value and the district will become a brand new touristic destination in the heart of Istanbul. From a sociological standpoint Tarlabaşı will no longer be a rundown area and will be transformed into an area in tune with modern lifestyles, said Demircan highlighting that their goal was to revitalize the historical cultural wealth and sense of modernity and brotherhood in the neighborhood. "Tarlabaşı was Istanbul's poisoned princess. With this project, we are waking up Sleeping Beauty and introducing her to Istanbul residents," said Demircan.

"ECONOMIC AND CULTURAL VALUES TO BE REVIVED"

Commenting on the Tarlabaşı 360 project being awarded Europe's best urban renewal project, Çalık Real Estate Executive Board Member Yetgin stated, "As Çalık Real Estate, the added value our projects give to districts and cities is of utmost importance," adding that with the Tarlabaşı Urban Renewal Project they aim to make the historical neighbor more livable and safe. "In addition to a visual transformation, urban renewal in Istanbul, which is a first degree earthquake zone, is of vital importance. With this project, one of Istanbul's most valuable treasures Tarlabaşı is being brought to life and as a result in addition to adding great economic value, Istanbul residents will also have the chance to meet with a cultural value kept secret until now," said Yetgin, adding how pleased and proud they are to have been awarded one of Europe's most prestigious awards.

PROJECT TO BE LAUNCHED IN NOVEMBER

The Tarlabaşı 360 project includes the restoration of historical buildings as well as a series of more modern architectural renovations. To be launched in November, the Tarlabaşı 360 project is significant for being the first urban renewal project to be embarked on jointly by the private and public sector. The project focuses on an area of streets and avenues situated within a nine-parcel area that will include art galleries, fancy shops and dining. The project will create a nostalgic atmosphere in the neighborhood by bringing in open-air painters and street musicians. Major global funds are already showing interest in the project which, due to its location, stands to be one of the most privileged real estate projects. Meanwhile, Fıçıcı Abdi Avenue, which is located within the project area, stands to be a potential rival to the city's popular İstiklal Avenue.